On January 31, 1920, Joe Malone scored 7 goals for the Quebec Bulldogs in a 10-6 win over the Toronto St. Patricks. It was said to be one of the coldest nights of the Winter that year in Quebec and only 1,200 fans were in attendance. Those 1,200 fans witnessed something that hasn't been done since with Malone's 7 goals setting an NHL record that stands to this day.Malone nicknamed "The Phantom" was one of hockey's most prolific goal scorers in the early days of the NHL and surprisingly enough he had an even better game in the 1913 Stanley Cup Finals when he scored 9 goals in the first game of the series, this game predated the NHL and the Bulldogs were a member of the Canada Hockey Association. 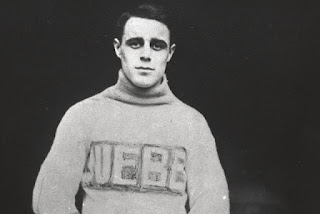 When the NHL formed in 1917 his Quebec team dispersed their players throughout the NHL, Malone landed with the Montreal Canadiens where he became the first scoring leader in the history of the league. Averaging 2.20 goals per game in his first NHL season, it is far and away the highest goals per game average in the history of the league. He scored 44 goals in just 20 games. It would be impossible to keep up that pace in the modern day NHL, but just to put it in perspective, if someone could they would score 180 goals in a season. In his first NHL game he scored 5 goals against the Senators in Ottawa, which is the record for any Candiens player for goals in a road game. He also scored at least one goal in his first 14 games in the NHL, that streak is the second longest scoring streak in the history of the league. Malone would return to the Bulldogs after they resumed operations in 1919 and he continued his scoring. 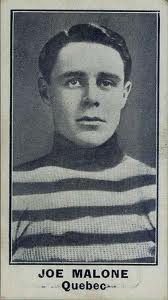 The night he scored 7 goals, his Bulldogs were struggling with a 1-10 record and their opponents were a game under .500 with a 5-6 record of their own. Both teams were out of contention, so it was hardly the premier matchup of the night, considering the Ottawa Senators were hosting the Montreal Canadiens with a playoff spot on the line. Even with that being the case Malone would make the game one to be remembered. He scored his first goal almost 7 minutes into the first period, Toronto's Ivan "Mike" Mitchell kept him from putting the biscuit in the basket the rest of the first but an offensive explosion was on the way. Just 50 seconds into the second period Malone notched his second goal of the game, then added two more before the period was over. With 4 goals already Malone was on fire and the Toronto coach decided to try his backup goalie Howard Lockhart, the St. Pats tried desperately to get back into the game as they cut the led down to 7-6 in the third before a 5 minute major against Toronto set Malone up for his fifth and sixth goals of the game. He would light the proverbial lamp one more time late in the game scoring his historic 7th goal and preserving a 10-6 win for the Bulldogs. It was an absolutely dominating performances by one of the best players of his time.

The Bulldogs moved to Hamilton, Ontario and became the Tigers following that season and Malone went with them playing for two seasons with the Tigers before finding himself with the Canadiens, where he finished his career. In his latter years in Montreal he did not produce, in fact he only scored one goal in his last two seasons in the NHL. He played 7 seasons total and in his first 5 he was one of the most dominant scorers in the game scoring 142 goals over 5 years. Before  there were names like Gordie Howe, Rocket Richard, and Wayne Gretzky, there was a guy they called The Phantom and that guy was a badass who owns one of the most unbreakable records in the history of the NHL.  Malone was inducted into the Hockey Hall of Fame in 1950 and was a two time Stanley Cup Champion in 1912 and 1913 as a member of the Bulldogs.

Only two players have come close to the  record in the modern era, St. Louis' Red Berenson in 1968 and Toronto's Darryl Sittler both scored 6 goals but couldn't match what Malone had done. Here is a list of player who scored 5 goals or more in one game: http://en.wikipedia.org/wiki/List_of_players_with_five_or_more_goals_in_an_NHL_game

Here is a look at his stats:
http://www.hockey-reference.com/players/m/malonjo01.html