January 12, 1969: Joe Namath and the Jets upset the Colts in Super Bowl III 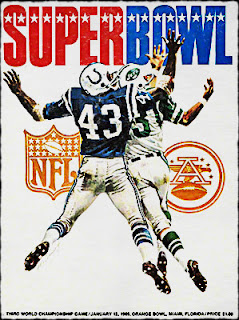 On January 12, 1969, star quarterback Joe Namath backed up his guarantee, as he led his Jets to a surprising victory in Super Bowl III. Just three days before the game was set to take place in Miami, Namath told reporters "We're gonna win, I guarantee it." It was a statement that would be immortalized after the Jets pulled off the improbable upset over the heavily favored Baltimore Colts. When Namath's head coach Weeb Ewbanks heard that his young star said that, he was beside himself  telling Joe you don't need to give that team anything to help motivate them. Joe came back with if they need that to motivate them they probably aren't going to win the game anyway. It's safe to say Namath's cup runneth over when it came to confidence.

Even with the guarantee almost everyone outside of New York thought the Colts would easily handle the 18 point underdogs, they were in for a surprise. The Jets came out in the first quarter and established their running game early, while they didn't score in the first quarter they were laying out groundwork for success. With Johnny Unitas sidelined due to injury the Colts started Earl Morrall at quarterback, early on it looked like he would lead the team well, they reached the Jets 19 yard line before kicker Lou Michaels missed a chip shot 27 yard field goal. That took the wind right of the Colts sails. Every time Baltimore had something go their way, they would shoot themselves in the foot. It was one thing after another, whether it be a missed field goal or Earl Morrall or throwing interceptions Baltimore was almost beating themselves. In the meantime, Namtath led his team on an 80 yard drive that was capped off with a four yard touchdown run by fullback Matt Snell. With the Jets up 7-0 it was the first time in Super Bowl History that an AFL team had led in a game. 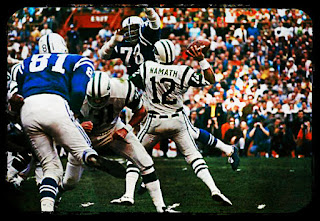 The second half started off with a Colts fumble, which led to a three more points for the Jets. Baltimore was still lacking rhythm and were quickly forced to punt. Namath and his squad made the most of it by moving the ball 40 yards, to setup another Jim Tuner field goal. By the middle of the third quarter an exasperated Don Shula went to his injured quarterback Johnny Unitas. Initially Unitas didn't provide the spark Shula was looking for. He quickly went three and out which forced another Baltimore punt. Following the punt the Jets were able to hit another field goal early in the fourth quarter. With the score 16-0 it looked like it was over for Baltimore. Johnny U was able to engineer a drive that finally put 7 points on the board for the Colts, but it wouldn't be enough as the Jets hung onto the 16-7 victory. As Namath ran off the field he held up his index finger to signify his team was #1, and they were on that January day in 1969. 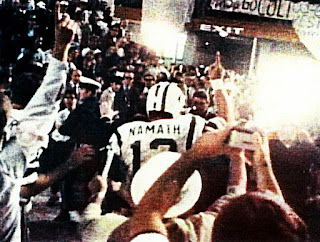 Namath went 17/28 with 206 passing yards, 133 of those yards went to receiver George Sauer. Broadway Joe received MVP honors for his performance, to this day Namath is the only quaterback to win the Super Bowl MVP without throwing a touchdown pass. While Joe was named the most valuable player his head coach Weeb Ewbanks was probably the most valuable member of the Jets organization. The game plan that Ewbanks put in place is what won the game for New York. With his #1 wide receiver Don Maynard hampered by injury, Ewbanks still used him as an effective decoy. With the Colts unaware of Maynard's injury they double teamed him which opened up the door for a big day for George Sauer. What makes this game so great is not only was it the first time that an AFL team won the Super Bowl, it was  like David slaying Goliath, nobody gave the Jets a chance besides those guys in the New York locker room, they knew they could and they showed the world what they were made of.


You can watch some interviews and highlights here:
http://www.youtube.com/watch?v=GIxIRkiThak