January 28, 1953: Fred Saigh, the owner of the St. Louis Cardinals convicted of tax evasion and sentenced to prison 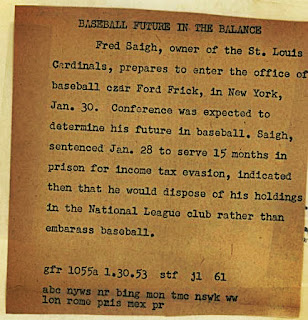 On January 28, 1953, the owner of the St. Louis Cardinals Fred Saigh was convicted of tax evasion and sentenced to 15 months in a federal penitentiary, he only served 5 months before being released. Just two days after the conviction Saigh met commissioner Ford C. Frick and agreed to sell the team. He made the decision to sell to Gussie Busch for $3.75 million dollars. Busch owned the Anheuser Busch Brewery based out of St. Louis. The decision to sell to Busch was based solely on the team staying in St. Louis, with Saigh turning down significantly higher offers out of Milwaukee and Houston.

Saigh made a fortune as a lawyer and an investor, as well as, an owner of prime commercial property in the City of St. Louis. When he learned that the owner of the Cardinals Sam Breadon was in failing health he brought in another well established businessman from the St. Louis area named Robert Hannegan and together they purchased the team for $4 million dollars in 1947. By '49 Hannegan had health problems of his own and sold his share of the team to Saigh before passing away later that year. Saigh had to contend with the St. Louis Browns who not only shared Sportsman's Park, but many thought they were trying to run the Cardinals out of town. After getting in the legal trouble over tax evasion the decision he made to sell to Gussie Busch totally changed any possibility of  that happening. Busch had much deeper pockets than Bill Veeck the owner of the Browns. With Veeck realizing that he wouldn't be able to compete with the new owner of the Cardinals, he sold Sportsman's Park to Busch and by 1954 the Browns were headed to Baltimore to become the Orioles.

It all started with the legal troubles for Saigh, it's hard to say what would have happened with the franchise if he was able to remain the owner but him being forced to sell brought on the Gussie Busch era in Cardinals baseball. His ownership of the team might have been short, but what it entailed had a great historical impact on the city. Busch was the primary owner from 1953 until his death in 1989, in that time the Cardinals won 6 National League Titles and 3 World Series Titles. It seems so crazy to me to think of the Cardinals residing in any other city than St. Louis. You just never know how much it would have changed history if a different decision was made or even if Saigh was able to avoid the charges and remain owner of the team. Sort of an interesting thing to think about.
Posted by Wade Forrester at 1:06 PM