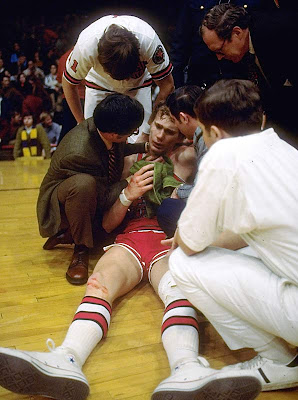 On January  25, 1972, one of the ugliest brawls in the history of college basketball took place at Williams Arena in Minneapolis, Minnesota. The Ohio State Buckeyes came to town, to take on the Gophers in a Big 10 matchup. The Minnesota team were many years removed from success, in fact the last time they won the Big 10 title outright was in 1919, they also had shared the title in 1937. Under new head coach Bill Musselman the attitude was changing in Minnesota, when asked how long did it would take before he expected the team to win, he said "We'll win right off. I don't believe in rebuilding years." He brought in several players and quickly made them a contender in the conference. The team brought new found interest in the squad and the arena was packed with 17,775 fans ready to cheer on their Gophers.

Before the game even started the Buckeyes were booed by the fans as they took the floor. Then the Gophers liked to put on a show while warming up, featuring a Harlem Globetrotter like show that had them showing off their ball handling skills and dribbling techniques with loud rock music coming through the P.A. speakers that got the crowd and team pumped up. The game was well played and officiated early. The first signs of trouble came as the players were walking off the court at halftime. The Gophers Bob Nix held up his fist as Buckeyes center Luke Witte was walking by him, Witte shoved the fist out of his way and barely caught Nix on the jaw in the process. It seemed rather insignificant at the time, but that little incident really pissed off some of the Minnesota team and a pretty bad seed had been planted. 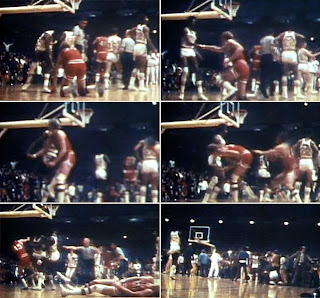 It was good game on the floor as the Gophers took a 32-30 lead with just a little under 12 minutes left, then the Buckeyes rang off ten straight points to give them a 40-32 lead. The Gophers tried desperately to come back but never came closer than 5 points. With the major momentum shift the crowd also shifted into an unruly mess, throwing whatever debris they could find, onto the floor. The fans in the house were warned that the team would receive a technical foul if they kept it up which only pissed them off more as they booed and threw even more debris. When play resumed the Buckeyes were well on the way to a victory, then with 36 seconds to go the 7 foot center Luke Witte was driving the lane, for what should have been an easy layup. That easy layup turned into a cheap foul by Clyde Turner then Corky Taylor caught Witte with a right hook to the ear. After Taylor was called with a flagrant foul and ejected the crowd booed and the boiling point was upon us. With Witte on the floor Corky Taylor extended his arm in what looked like an act of good sportsmanship. It was far from that, as he helped him up Taylor kneed Witte in the groin and sent him falling back to the floor, all hell broke loose. With fist flying from every direction Witte was on the floor laying helplessly when he was stomped by Gophers player Ron Behagen. Meanwhile with players and fans all ganging up on the Ohio State team Mark Wagar was pummeled by future MLB Hall of Famer Dave Winfield who had just joined the Minnesota basketball team. When order was finally restored Witte and Wagar were sitting on the floor beaten and bruised. Witte didn't recall the end of the melee, he just recalled being in the emergency room. Witte received the worst damage as he had to have 29 stitches in the face and a scarred cornea with the latter effecting him for the rest of his life and his career. The referees would decide to end the game rather than play the final 36 seconds giving Ohio State a 50-44 victory. 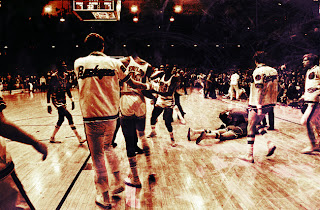 The commissioner of the Big 10 Wayne Duke handed down stiff penalties to Ron Behagen and Corky Taylor with suspensions for the rest of the season, many thought that Winfield should have also been suspended. In the end it was a classless on the part of the Minnesota and their fans. As I dug into this story it also made me wonder why the Gophers coach Bill Musselman wasn't suspended also, he instilled the "win or die" mentality and basically set his team up for this terrible event. A lot of the events I get to use for On This Day In Sports are truly great events that are more than fun to talk about, not the case with this one. Fights will always happen in sports, emotions are running high and everyone involved wants to win the game. When a team doesn't win one of the best things they can do is lose with a little class, just play the full game and give it everything they have. Unfortunately Bill Musselman might have taught his players how to play some ball, but he sure in the hell didn't teach them how to play with a little sportsmanship.

Video of the incident:
http://www.youtube.com/watch?v=lxnCY0CZ1pE