On January 8, 2000, the 13-3 Tennessee Titans took on the 11-5 Buffalo Bills in an AFC Wild Card matchup. The game would become known as "The Music City Miracle" after Tennessee staged a last second comeback on one of the most exciting plays that I have ever seen end a football game.

With the stage set, Bills head coach Wade Phillips rocked the boat before the game even started by naming Rob Johnson starting quarterback, over Doug Flutie who had started all but one game in the regular season and helped get the team to the playoffs. The two teams would struggle to put points on the board early, until Tennessee's Jevon Kearse broke through for a sack in the endzone that put two points on the board for the Titans. On the free kick the Titan's Derick Mason returned the ball 42 yards, it set the Titans up at the Bills 28. Five plays later Tennessee quarterback Steve McNair took it in himself on a one yard run. The Titans would force a Bills to punt, then would go on a 56 yard drive that was capped off with an Al Del Greco field goal. At the end of the first half it was all Titans as they led 12-0. 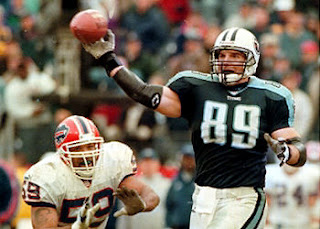 The Bills came out determined to make it a game in the second half, right out of the gate Johnson handed off to running back Antowain Smith, who took the rock 44 yards. Four plays later Smith punched it in capping off a 62 yard drive and putting points up on the scoreboard for Buffalo. In the fourth quarter Smith would strike again, following a 65 yard drive the running back took it in from 4 yards out, after a failed two point conversion the Bills led 13-12. Late in the fourth with their backs against the wall, Tennessee responded with a short drive and a Del Greco field goal that put them back in front 15-13. Rob Johnson and the Bills took over with just 1:48 on the clock. Johnson led his team on a 37 yard drive that was finished off with a 41 yard field goal from the foot of Steve Christie. With only 16 seconds left on the game clock and the Bills ahead 16-15 it looked like Buffalo would advance to the next round. What was about to happen was nothing short of amazing. 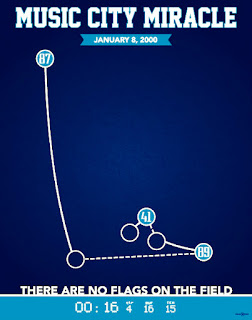 The Bills kicked a low short kickoff  that found its way to the Titan's Lorenzo Neal, he ran to his right then handed the ball of to tight end Frank Wychek, Wychek spun and threw a lateral strike to wideout Kevin Dyson then Dyson ran it 75 yards down the sideline for the game winning score. It was a madhouse in Nashville, the play went under immediate review only to be upheld, after an extra point was knocked through the uprights the Titans had completed the 22-16 victory.

It was one of those "what just happened moments" in sports. The play had been practiced by the Titans leading up to that game and it was well executed on the field that day. It was by far one of the most exciting finishes to a playoff game that I ever watched with my own eyes. The Titans rode the wave of momentum from that game all the way to the Super Bowl. Even though they lost to the Rams they had been part of one of the most memorable finishes in the history of the NFL.

Check out the play here
https://www.youtube.com/watch?v=Pfz4JViRkoA

https://www.facebook.com/OnThisDayInSports
Posted by Wade Forrester at 3:06 AM