January 4, 1984: The Oilers and North Stars score a combined 20 goals on an 8 point night for Wayne Gretzky


On January 4, 1984, the Minnesota North Stars visited the Northlands Coliseum in Edmonton, Alberta, Canada to take on the Oilers. By the end of the game the two teams scored a modern day record combined 20 goals. Minnesota started Don Beaupre between the pipes and Edmonton countered with Grant Fuhr, there is no way they could have been prepared for the assault they were about to endure. 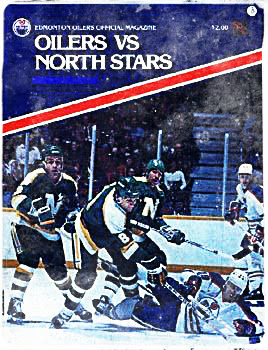 The scoring started just two minutes and seven seconds into the contest on a goal by the Oilers' Glenn Anderson, it was Anderson's 25th goal on the season and Mark Messier picked up an assist on the play. At the 7:41 mark in the period Wayne Gretzky notched up his 44th goal of the year, it came just two seconds after a Minnesota penalty had expired. The North Stars got on the board with a power play goal from Dennis Maruk, his tenth goal on the year was assisted by Neal Broten and Dino Ciccarelli. With just under 5 minutes to go in the first, the Oilers retook a 2 goal lead when Jari Kurri scored on the power play. Wayne Gretzky picked up an assist on that goal which extended an assist streak for the player to 17 games, it was his 38th assist in that streak and the score was now 3-1 with much more on the way. With just 2:05 left in the period Minnesota's Dino Ciccarelli joined in on the scoring fun by punching in his 23rd on the year, 25 seconds later the Oilers responded with another goal by Jari Kurri. 38 seconds later Gretzky scored his second goal. By the end of the period the score was 5-2 with the Oilers on top. When the teams came back on the ice to start the second period the North Stars made a change in net, by going to goaltender Gilles Meloche they hoped he would have better luck than Beaupre, it still wasn't pretty. Just 25 seconds into the period Ciccarelli scored his second goal of the night and it looked like the North Stars weren't going down without a fight. The Minnesota team cut the score to 5-4 with a power play goal coming from the stick of defenseman Brad Maxwell. Then Edmonton came back with Jari Kurri slowing the momentum of the North Stars by lighting the lamp for a hat trick, the score was now 6-4. The momentum shift didn't last long, just 40 seconds after the Kurri goal Minnesota cut the lead back to one when Steve Payne scored his 11th goal of the season. A little over 3 minutes later the Oilers answered back with a power play goal from Paul Coffey, it was his 20th of the year. The North Stars Brian Bellows responded with his 21st of the season and the score was now 7-5. The two teams decided to take a break from the scoring by deciding to fight, the first time fists flew, came 11 minutes and 50 seconds into the second period with Mark Napier throwing down with Edmonton's Ken Linesman. Less than a minute later the gloves dropped again this bout featured Minnesota's Brian Bellows against Randy Gregg. The second fight hurt the North Stars because Bellows received an extra minor giving the Oilers a power play. It only took 16 seconds for Wayne Gretzky to turn it into points for the Oilers and by doing so he rang up the 24th hat trick in his career. Willy Lindstrom jumped into the action for Edmonton by scoring a goal and was followed with Gretzky grabbing his fourth goal of the night, Gretzky also had four assists which brought him to eight points on the night. The Lidstrom goal and Gretzky goal both had been assisted by Mark Messier who had also chipped in on several other goals bring his assist total to 5, a franchise record for the Oilers. When the second period came to an end the score was 10-6. Simply put the 2nd period was crazy.


In the third period the North Stars struck first just 2 minutes and 20 seconds in Keith Acton scored a goal, then a little over a minute later his teammate Craig Hartsburg rang one up, with the score 10-8 and plenty of time on the clock, it looked like the North Stars had a shot. Paul Coffey took the wind out of Minnesota by  scoring his second goal on the night at the 7:10 mark. It would take over eight minutes for another goal to be put in the net, this time it was Randy Gregg scoring, less than 5 minutes later the Oilers got the W by the score of 12-8. The 20 combined goals had been the most total goals scored in a game since January 10, 1920 when the Montreal Canadiens beat the Toronto St. Patricks 14-7. 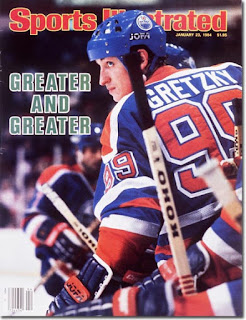 With four goals and four assists it was a career night for Wayne Gretzky, he did have another eight pointer earlier that season but it came on 3 goals and 5 assists which puts this one a step above. Grant Fuhr was between the pipes the entire game for the Oilers and was credited with the win after stopping 28 of 36. The North Stars faced 36 shots as well with the stater Beaupre making 7 saves on 12 shots then his backup Maloche stopping 17 of 24. I think it's safe to say it was a rough night to be a goaltender in Edmonton. It was just a crazy night in Edmonton, both teams were solid Stanley Cup contenders and even found themselves pitted against one another in the the Campbell Conference Final, only to have the Oilers sweep the North Stars on their way to back to back championships for the club. Well before that they both played in one of the most insane games this guy has ever run across.

I was able to run across a highlight video of the game you can watch it here
http://www.youtube.com/watch?v=jm_GMpVCoiA
Posted by Wade Forrester at 3:05 AM