January 1, 1942: The one and only time the Rose Bowl was played outside of Pasadena, California 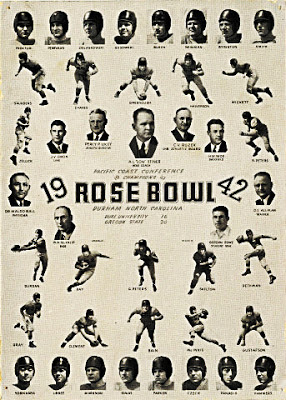 On January 1,1942, the Rose Bowl would be played in Durham, North Carolina, the teams set to play were the Duke Blue Devils and the Oregon State Beavers. The game was moved out of Pasadena due to fears of a Japanese attack on the West Coast. It was the first and only time the game wasn't played in Pasadena. With the attack on Pearl Harbor on December 7, 1941 the country was on edge, and there was fear that the next Japanese target would be somewhere along the West Coast.  In the days following the attack on Pearl Harbor the Japanese had submarines off the West Coast attacking multiple merchant ships, sinking two of them. The fear of an attack was real, some even thought that the Japanese could attempt an invasion in Oregon, Washington, or California. 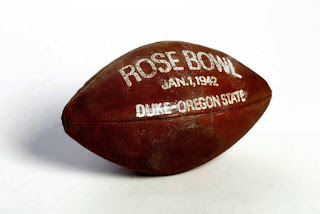 Within a week of the attack on Pearl Harbor the Rose Bowl committee met and decided to cancel both the Tournament of Roses Parade and the Rose Bowl game. The parade would have attracted more than a million people, while the game would have had more than 90,000 spectators in the stands. Knowing that the large crowds could turn into the perfect targets for the Japanese the Rose Bowl committee was strongly persuaded by members of the Armed Forces to cancel the planned events. With the game in peril the administration at Duke University offered to host it in Durham, Oregon State accepted the invite and the show would go on. 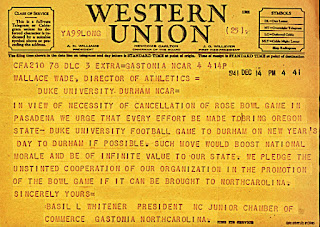 The 8-2 Beavers walked into the game as 14 point underdogs against the 9-0 Blue Devils, which made a lot of people wonder why they even accepted the invitation. They would show people why by upsetting the Duke team. New Years day was a rainy one, which looked like it favored the visitors. On the opening kickoff the Blue Devils fumbled the ball with the Beavers recovering, even with Duke's defense holding Oregon State it was still a punch in the gut right out the gate. The Beavers would put the first points on the board later in the first quarter, when Don Durand ran the ball in from 15 yards out Oregon State had their first lead of the day. With both defenses playing solid football both teams had their work cut out for them offensively. Late in the second quarter Duke was able to put a drive together that was capped off with a 3 yard touchdown run by the Blue Devils Steve Lach. The team went into their locker rooms at the half all knotted up at 7 apiece.

In the second half  both defenses played good football, but there was a 3 drive stretch in the third quarter that both teams would get it going on offense. Oregon State struck first, Beavers quarterback Bob Dethman was able to hook up with George Zellick on a 31 yard pass reception that would put the Beavers ahead. Duke would come right back, after putting together a successful drive Winston Sigfried punched it in from one yard out. In the following drive the Beavers quarterback found Gene Gray streaking up field, after hitting him for an initial gain of 12 yards, the running back took it 28 more yards for the catch and score. Oregon State would miss the extra point, leaving the door open for a Blue Devils comeback. A comeback just wasn't in the cards for Duke, even with them moving the ball into Beavers territory 3 times the Oregon State defense stood tall. They intercepted two Duke passes and shutout the Blue Devils the rest of the way. The only points the Blue Devils could muster up was from a safety after the Beavers Don Durand got caught in his own endzone by Mike Karmazin. When the clock ran down to zeros, Oregon State had won the Durham Rose Bowl by the score of 20-16. 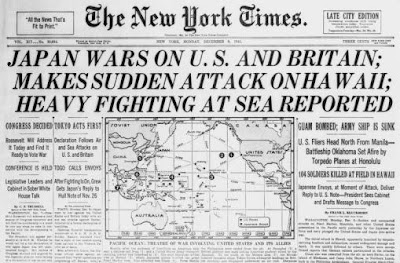 The Rose Bowl was the farthest thing from the minds of many Americans that day. It was a time that men were preparing for war, there were men on that football field and even many of the 56,000 that attended the game that had what was facing the nation on their minds. In fact a lot of those men who took to the field that day would go onto serve in the war. Between the two teams four men didn't return. Walter Griffith a sophomore running back out of Duke enlisted into the Marines in January of 1942, 11 months later he was killed in battle. Oregon State running back Everett Smith drowned during an amphibious landing in the South Pacific. Running back Al Hoover was one of 1,300 Marines who perished at the Battle of  Peleiu Island in September of  1944, Hoover dived on a Japanese grenade to save those around him. In 1945, Bob Nanni a star tackle out of Duke was killed at Iwo Jima. Gene Gray, the running back that insured a victory for Oregon State would fly more than thirty bombing missions during the war. He would go onto become a Navy test pilot, in 1948 the plane he was piloting crashed upon takeoff. Gray survived but was severely burned, doctors had to amputate both of his arms due to the injuries he suffered in the crash. I've always looked up to athletes and the amazing things that they do, those men who went from a football field into battle puts them a step above the rest, they were much more than athletes. 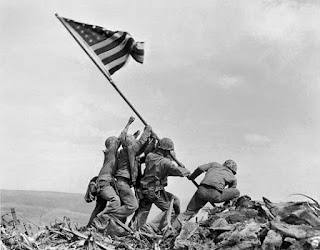 There were some positive stories that came from some of the experiences of the athletes and coaches who served. Wallace Wade had been the head coach at Duke, as a member of the army reserves he was called into service. During the Battle of the Bulge, Wade found himself cold and starving, he then ran across Stan Czech a former tackle from Oregon State that had played in the '42 Rose Bowl. Czech was able to provide the coach with food and some hot coffee, I'm sure the coach was glad he ran into an old foe. In another instance, Charlie Haynes a backup quarterback from Duke and Frank Parker a starting guard from Oregon State found themselves both leading rifle platoons in the 88th Infantry Division. With both men deployed to Italy they reminisced about the game they had been a part of on that first day of 1942. Several months after they were deployed Haynes was leading his men up a hill near the Arno River in Italy, he was struck by shrapnel that caused a wound in his chest the size of a fist. One of the first soldiers to reach Haynes was none other than Frank Parker, in 1991 Haynes said "If it wasn't for Frank Parker I wouldn't be here," he went onto say "I was dying, no melodramatics about it, I thought I was dead." Even with those men facing one another years before, they found themselves on the biggest team they would ever be a part of, they fought and took care of each other like any good teammate would. 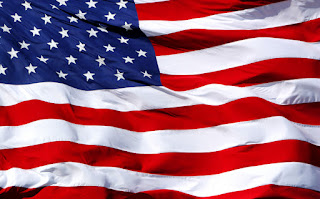 The story about the only Rose Bowl that was ever played outside of Pasadena is more than just a sports story. It is about sacrifice and perseverance. So many men sacrificed their lives in the war and they came from every walk of life. I hope by telling this one it pays tribute to the men who sacrificed their lives and also to the men who survived. My Grandfather served in World War II, he was one of the happiest men I've ever known in my life, while war was something we never spoke about I knew that he served not only in World War II but he had also served in Korea, and Vietnam. He made a career out of serving in the military and he deeply cared about his country. In 1991, when the Persian Gulf War broke out I can remember being told that he cried for the soldiers that were about to embark into war, he knew what war was all about. His name was Theodore Armstrong and while he wasn't an athlete, he was a soldier and a personal hero of mine. You never know he might have served along side of some of those men who played the Rose Bowl in North Carolina on that New Years day in 1942. I'll start off this New Year by saying thank you to each and every veteran who has given me the freedoms that I've always known, if you are currently serving I thank you as well.


Happy New Year everyone, I hope it's a great one.
https://www.facebook.com/OnThisDayInSports

Posted by Wade Forrester at 2:16 AM