January 2, 1982: AFC Divisional matchup that would become known as The Epic in Miami


On January 2, 1982, the San Diego Chargers traveled to Miami, Florida to take on the Dolphins in an AFC Divisional playoff game, what took place was one of the best football games the NFL had ever seen. The Don Coryell Chargers coached stood at 10-6 against Don Shula's 11-4-1 Dolphins, with the table set for a great game, 73,000+ packed the stands. What took place at the Orange Bowl would earn the nickname "The Epic in Miami" after an improbable comeback led to an overtime thriller.

It looked like it was going to be a blowout early when San Diego came out the gate flying. On the first drive of the game San Diego's quarterback Dan Fouts got his team in a rhythm quick. He started from his own 22 and rove itdown to the Miami 14, one of the key plays came on a 3rd and 14 when Fouts hit his wide receiver Wes Chandler on the fly for a 47 yard gain. When the drive stalled at the Miami 14 yard line San Diego brought in Rolf Benirschke who kicked a 32 yard field goal for the first points of the day. After the Chargers forced the Dolphins to punt, Wes Chandler took the punt return 56 yards for a touchdown, the score was now 10-0 and it looked like San Diego was starting to roll. The momentum would stay with the Chargers, on the ensuing kickoff  San Diego recovered the ball after an odd bounce went their way, it would lead to a one yard touchdown run for running back Chuck Muncie. When the Dolphins took over on offense it wouldn't take long for them to put the ball right back into the hands of their opponents, their starting quarterback David Woodley was intercepted by safety Glen Edwards, who returned the ball 35 yards. Fouts seized his opportunity by hooking up with rookie running back James Brooks on an eight yard touchdown. With the score 24-0 after one quarter it looked like a heavyweight fighter was in the ring with a featherweight. 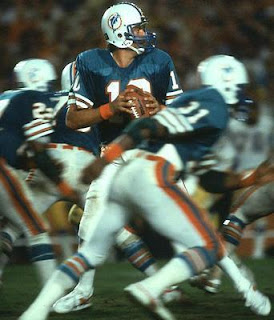 I'm sure that a lot of the people that were watching the game thought it was over, the important thing is head coach Don Shula and his Dolphins team wasn't about to give up. After another train wreck of a series, Shula decided to make a change at quarterback, by bringing in Don Strock it gave the team the much needed spark they were looking for. Strock stepped on the field and on his first play he completed a pass to Duriel Harris for a 17 yard gain, from there the Dolphins were able to put together a 63 yard drive, the drive would be capped off with a 34 yard field goal by Uwe von Schamann. With the Dolphins finally able to do something positive it looked like it might have sparked the defense, they forced a Dan Fouts fumble that gave the Dolphins great field position at the Chargers 39 yard line. The Dolphins took the ball all the way down to the one yard line, with a one yard pass to tight end Joe Rose, Strock  had converted the Chargers turnover into 7 points for his Dolphins team. The Chargers looked like they had something going but their drive stalled out at the Dolphins 37 yard line, they called upon their kicker who sailed a 55 yard field goal attempt wide right. The Dolphins took over on offense with only 30 seconds to go in the half, it would be plenty of time to work with for Strock. After three plays the Miami team had positioned themselves at the San Diego 40, with only enough time for one more play before the half Coryell called  the "hook and lateral", what an exciting play it was. Strock took the snap then fired it to Duriel Harris at the 20 yard line, Harris then lateraled the ball to running back Tommy Nathan who took the rock 25 yards into the endzone. The play that trimmed the Chargers lead to 24-17 was almost too exciting to describe in words and that is a good reason to love Youtube http://www.youtube.com/watch?v=EH-dSc0K8sw, I watched it several times with the way that Harris was almost falling over and Nathan taking it to the house was just awesome. I'm sure at that point the crowd had enough electricity running through it to power all of New York City. In the third quarter the Dolphins continued to carry momentum. They received the ball to start the half and drove it 74 yards in eight plays, that drive was capped off with Strock connecting with the Joe Rose once again for another touchdown, they were all tied up at 24. What happened from there was a seesaw battle, the Chargers responded with a 60 yard drive that had the exclamation point put on it with a 25 yard touchdown reception by Kellen Winslow, with a little more than 4 minutes to go in the 3rd quarter the San Diego was back on top. Strock came out like a gunslinger hitting every target he aimed at, he took the ball and completed six consecutive passes with the last one being a 50 yard strike to tight end Bruce Hardy, it tied the game right back up. The Chargers took over deep in their own territory, after Fouts failed to complete his first two passes he was intercepted by safety Lyle Blackwood. When Blackwood found it in his hands he lateraled the ball to cornerback Gerald Small, who took it all the way to the Chargers 15 yard line before being taken down. It would setup a Strock to Nathan 12 yard touchdown that gave Miami their first lead of the day. With Miami clinging to the 38-31 lead they were in clock control mode, then running back Andra Franklin had the ball slip from his hands it was recovered by San Diego safety Pete Shaw at the Chargers 18 yard line. With just 4 minutes and 39 seconds left in regulation Fouts led his team down to the Dolphins 9 yard line then with just 58 seconds left on the clock the quarterback sailed a pass over the head of his intended target Kellen Winslow but right into the arms of his running back James Brooks, this game was tied at 38 apiece. When  Strock and the Dolphins attempted to put the ball in a position for a game winning field goal in regulation the ball was intercepted by Willie Buchanon only to be fumbled and turned right back over to the Dolphins. It looked like things were going in the Dolphins favor, after a couple of plays they were in position to kick a game winner. When Von Schamann sent the ball toward the uprights Kellen Winslow was able to get a piece of the it causing the kick to fall short. In overtime, San Diego won the toss, Fouts led his team to the Dolphins 10 yard line where they decided to go for the field goal, it looked like a chip shot for Benirschke, but a bad snap caused the kicked to sail wide left and the game continued. Miami would get their opportunity after a solid drive from Strock and the Dolphins offense, Von Schamann had another chance to win it only to have it blocked by a defensive lineman named Leroy Jones. When Fouts took over at his own 16 yard line he would take the team on a 74 yard drive that included two deep strikes to Charlie Joiner. With the Chargers at the Dolphins 10 yard line Coryell sent out his kicker, this time Benirschke sent the ball sailing through the uprights and the Chargers had just won a thriller by a score of 41-38. It took13 minutes and 52 seconds of overtime play to decide the game, near the end of it some of the men that played in the contest could barely pick themselves up off the ground, it had been a hot night in Miami and exhaustion and dehydration had kicked the players asses. The Dolphins might have lost but many of their fans still consider it one of the best playoff games in the history of the team, and rightly so.Only one team moved on in the playoffs but they were both fierce competitors which made them both winners. 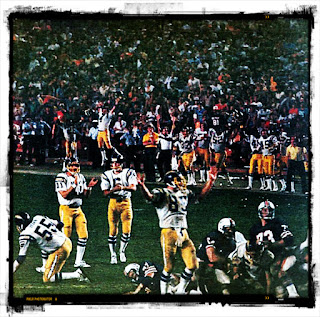 Between the teams they had 1,036 yards of total offense, 809 total passing yards, and 79 points scored, all were playoff records at the time. The performances by both teams was something to be admired. Both quarterbacks threw for over 400 yards, which when you think about Strock it makes it even more of an accomplishment with the fact that he didn't come into the game until the second quarter. There were great performances for both teams but one player stood above the rest and that was Kellen Winslow. The tight end hauled in a playoff record 13 receptions for 166 yards and a touchdown then to add on to that he had blocked the crucial field goal. Winslow was so physically drained after the game he had to be assisted off the field he had battled through a pinched nerve in his shoulder, dehydration, severe cramps, and even a gash in his lip that required stitches. Winslow borrowed a quote that Muhammad Ali used after The Thrilla in Manila, Winslow said "I've never felt so close to death before." Don Coryell said that it had been the most exciting game in his 30+ years as a coach and Don Shula agreed. I think Bryant Gumbel said it best when he said "If you didn't like this game then you don't like football." It was truly a game for the ages. Fouts and the Chargers would fall to the Bengals in the AFC Championship game, dubbed the "Freezer Bowl" it was one of the coldest games ever played, I'll save that story for another day. Regardless of  how the Chargers were knocked out of the playoffs that year they had played in one of the most epic battles of all time.


I wished was able to have seen this one with my own eyes, while I do remember hearing about it I never knew the entire rundown of the game. When I read about this and watched some of the different film I ran across it makes me want the NFL playoffs to start tomorrow. I love how you never know what to expect. It could be a great comeback like this one or "The Music City Miracle" in Tennessee or "The Immaculate Reception" in Pittsburgh. Never turn that tv off early because your team is down, we never know what could happen next.