On January 23, 1984, the Buffalo Sabres became the first team in NHL history to win 10 consecutive road games, with a 5-3 win in Boston. It is an accomplishment only matched by the St. Louis Blues in 2000 and then the New Jersey Devils in 2001. The '83-'84 Sabres had Scotty Bowman leading the way as head coach and featured a future Hall of Famer Gilbert Perreault as well as a cast of up and coming stars in Dave Andreychuck, Phil Housley  and Tom Barrasso. The team started the season posting a 16-10-3 record before the road winning streak began. After posting back to back road losses to the Blues and Blackhawks on December 6 and 7th, the road winning streak began.The win against the Bruins on December 10, 1983, it was the 30th game of the season, started it all. Buffalo did not lose a road game until game 53 on February 2, 1984, ironically the streak began in Boston, had the final win there and had it end there. 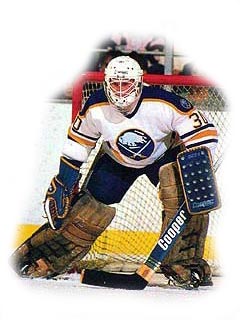 It was a solid season in Buffalo as they went on to post a 48-25-7 record that led to a playoff birth. Unfortunately for them it looked like they peaked too early. Whether it be injuries or the long season catching up with them, they struggled in the last stretch of the season and were knocked out in the first round of the Stanley Cup playoffs by the Quebec Nordiques. Even with the lack of playoff success they accomplished something that hadn't been accomplished before and that earns them a right to be on this page. I'm sure they were a fun club to watch especially when you look at some of those names that they had on that roster.
Posted by Wade Forrester at 1:05 PM