January 7,1927: The Harlem Globetrotters play for the first time 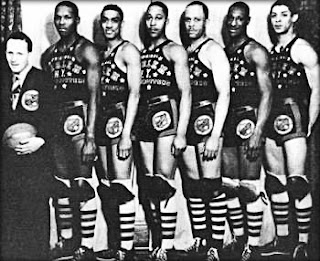 On January 7, 1927, the Harlem Globetrotters played their first game in Hinkley, Illinois just 50 miles outside of Chicago. The team was founded by Abe Saperstein after he took over coaching duties for a team of African American players that called themselves the Savoy Big Five. In a time that African Americans weren't able to play in the pros, Saperstein decided to name his team after the famous neighborhood of Harlem in New York City to promote the racial makeup of the team while he called them the Globetrotters to make is seem as if they had traveled around the world, it was a brilliant marketing scheme. Saperstein himself came up with the red ,white,and blue uniforms, he might not have known it at the time but when he was sewing the words New York on the jerseys he was starting something that would turn into a mutli million dollar organization.

The lineup in the first game for the Globetrotters featured Andy Washington, Willis "Kid" Oliver, Walter "Toots" Wright, Byron "Fat" Long, and Al "Runt" Pullins, the team split up $75 for the first game. They went onto play 117 games that first year winning 101 of them. Sapserstein was not only an owner and a coach he was a tireless promoter who even was known to play as a substitute in games the Globetrotters were playing. In less than ten years the team played in more than a 1,000 games in Iowa, Michigan, Minnesota, Wisconsin, Montana, as well as, North and South Dakota. Ironically, it wouldn't be until the late 60's that they played an actual game in Harlem. 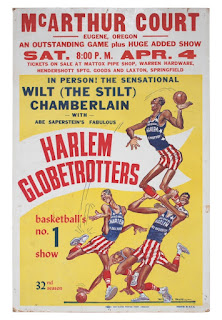 The Globetrotters participated in the World Professional Basketball Tournament on a yearly basis, winning it in 1940. That same year they won the championship, the team incorporated on court antics to their game. They would do everything from juggling acts to over the top shots that thrilled everyone in attendance. With the sideshow becoming a hit with the crowds, Saperstein told his players to keep it up as long as they had a comfortable lead. It would become part of what the Globetrotters are today.

In 1948 the Globetrotters gained respect by beating the Minneapolis Lakers of the newly formed NBA. By 1950 the NBA decided to allow black players in the league which made Saperstein have to compete for his talent. They not only were able to keep talented players around they became an international sensation becoming true Globetrotters as they traveled the world, even performing for the Pope in Rome. 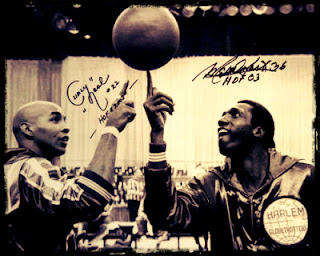 Throughout the years the Globetrotters have had a collection of talent that included Wilt Chamberlain, Meadowlark Lemon, Curly Neal, and many more. Since that day in 1927, they have played in more than 115 countries, in front of millions upon millions of fans. The team has been featured in television shows and even had a cartoon series spin off from their fame, they are are truly world renowned.  I personally took one of my nephews to game a couple of years ago and we had a great time watching them put on the show. If you get the chance to take in a Globetrotters game with your kids you should jump on it and when you are on your way there you can show off a little knowledge by telling them about how they got their start in January of 1927.

https://www.facebook.com/OnThisDayInSports
Posted by Wade Forrester at 11:12 AM