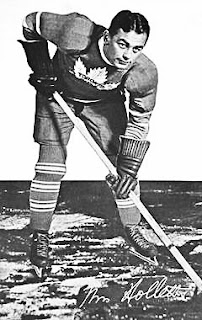 On January 15, 1936, Conn Smythe the owner of Toronto Maple Leafs sold William "Flash" Follett to the Boston Bruins for $16,000 at the time it was one of the highest amounts of  money a team had ever given for a player, by today's standards it would be over $250,000. It would be a decision Smythe would come to regret.

Hollett was a two sport player in fact he was discovered by Smythe while playing lacrosse. Smythe persuaded him to try his hand at professional hockey and inked him to a deal. His first few years on the ice were spent in the minor leagues, then in the '33-'34 season the Maple Leafs loaned him to the Ottawa Senators where he spent his first full season in the league. He returned to play for Toronto the following season and played another full year in the league before returning to the minors for a couple of seasons.

When Toronto sold him to the Bruins it would be a turning point in his career. He couldn't have landed with the team at a better time as the Bruins of the 30's were a dominate bunch that had too many future Hall of Famers to list. I would bet that fellow defenseman Eddie Shore had a good amount of influence on Hollett. He earned the nickname "Flash" becasue he was quick on the ice and he used that speed to become one of the best scoring defenseman in the NHL. His defining moment as a player came in Game 5 of the 1939 Stanley Cup Finals, Hollett scored the game winning goal that brought Boston their second championship in franchise history. The series had been played against the Maple Leafs which is why Conn Smythe might have regretted letting the player go. 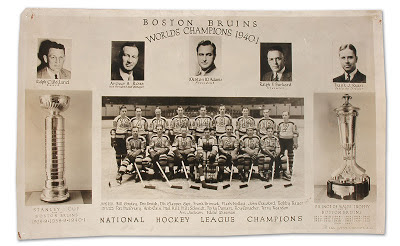 Flash went onto help the Bruins grab another Stanley Cup championship in '41 and also became the top scoring defenseman in the league, in the '41-42 season he scored 19 goals tying the record for a defenseman, he then followed that season up with another 19 goal performance. Boston traded Flash Hollett to the Detroit Red Wings in the middle of the '44 season, he continued to put the biscuit in the basket. The year he was traded he scored 15 goals between the Boston and Detroit, the last 6 of those goals were in a Red Wings uniform. His first full year in Detroit he became the first defenseman in the league to score 20 goals, it was a record that until the '68-'69 season when Bobby Orr of Boston Bruins scored 21, it should be noted that when Hollett scored 20 goals he did it with just a 50 game schedule by the time it was broken the NHL had expanded to 76 regular season games. His numbers fell off drastically following the 20 goal season and after a contract dispute with Detroit GM Jack Adams he was traded to the New York Rangers. Hollett chose to retire instead of accept the trade to New York. 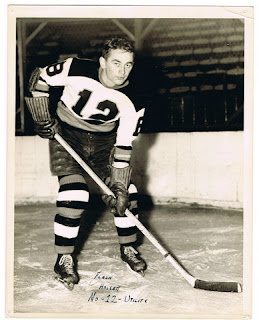 At the time of his retirement his 132 goals and 181 assists made him the highest scoring defenseman in the league with 313 total points. It was a pretty damn good career for a guy who had been sold for $16 grand a little more than a decade before. Flash Follett was a hard guy to dig up information on, most things I came across were short bits about how he should be in the Hall of Fame and I think those who say that have a great case. He was great player in his time and even if he played in an era that had many of his peers at war it shouldn't diminish what he did on the ice. I think with the fact that he won two Stanley Cup championships and retired as the top scoring defenseman in league history makes him among the league's best.

https://www.facebook.com/OnThisDayInSports
Posted by Wade Forrester at 11:38 AM