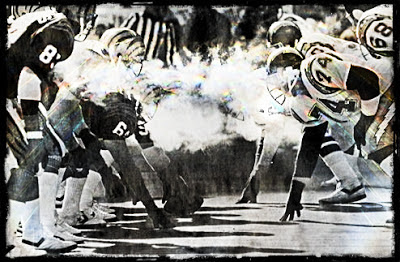 On January 10, 1982, the San Diego Chargers traveled to Cincinnati, Ohio to take on the Bengals in the AFC Championship game. The game would become known as "The Freezer Bowl", with temperatures dipping to -9 degrees it was only the second coldest game on record to the "Ice Bowl" that was played in Green bay in 1967 where the temperatures hit -15. Even though the temperature was technically colder in the "Ice Bowl" there were 25-30 mile per hour winds in Cincy in 1982 that made it feel temp was 51 below zero. Bengals head coach Forrest Gregg had played in the '67 Championship game on the Packers offensive line and he insisted it was colder in Cincinnati that frigid January day.


The game came just one week after the Bengals squeaked by the Bills with a 28-21 victory and the Chargers had just played the Dolphins in an overtime battle that became known as "The Epic in Miami". the game in Miami was an overtime thriller that was played in heat and humidity, very different than what the two teams were facing on this January day.
(Read about The Epic in Miami Here) http://onthisdayinsports.blogspot.com/2013/01/january-2-1982-afc-divisional-matchup.html

Before the Chargers even took the field running back Hank Bauer ran out to see how it felt and he described it as being hit with a 100 knives, they still had a game to play. Before it even started Forrest Gregg told his Bengals team "Look at this game like going to the dentist. It's going to hurt." When the Cincinnati 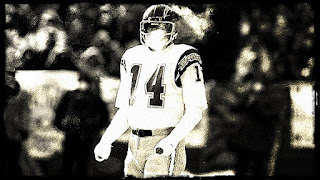 offensive line stepped on the field they did so without anything covering their arms, Bengals guard Dave Lapham recalled that the Chargers team looked at them like they might be mentally ill. The Bengals started off the scoring with a 31 yard field goal off the foot of Jim Breech. On the ensuing kickoff Chargers running back James Brooks fumbled the return and the Bengals snatched it up. Bengals quarterback Ken Anderson made the most of the opportunity and threw a quick strike to tight end M.L. Harris, extending the Bengals lead to 10-0. In the second quarter Chargers signal caller Dan Fouts was able to get his team on the board by hooking up with Kellen Winslow on a short pass that the tight end turned in to a 33 yard touchdown. The Chargers momentum swing was brief, the next time Fouts had the ball he was picked off by Bengals defensive back Louis Breeden. The pick turned into points for Cincinnati after they got to the goal line, running back Pete Johnson punched it in. The teams went into the locker rooms at the half with the Bengals hanging onto a 17-7 lead. In the second half the Bengals put the Chargers away. Jim Breech kicked another field goal in the third quarter then in the fourth Ken Anderson nailed the coffin shut when he hit wideout Don Bass for a three yard touchdown. The final score was 27-7 and the Bengals were headed to their first Super Bowl in the history of the franchise. Some said that the difference from "The Epic in Miami" to "The Freezer Bowl" could have been a 150 degree swing in temperature, insane. The Bengals would lose to the San Francisco 49ers in the Super Bowl, but they had definitely earned respect by winning one of the coldest games to ever take place. It really goes both ways, the Chargers might have lost to the Bengals but they had come off a memorable game just the week before and I'm sure they gave everything they had that frigid day, only one team could win. It was a truly memorable game that I'm sure the 46,000+ in attendance will never forget.


You can watch a great old highlight reel here
http://www.youtube.com/watch?v=sWUMv9m76eY