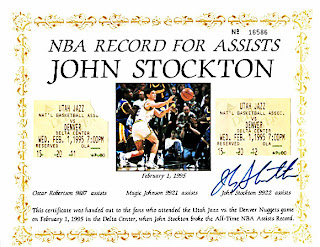 On February 1, 1995, John Stockton of the Utah Jazz surpassed Magic Johnson as the all time NBA assists leader when he recorded his 9,922nd assist in a 129-89 win over the Denver Nuggets. The point guard put up 12 points and recorded 16 assists in the contest. Widely regarded as one of the best point guards of all time and Stockton spent his entire 19 year career with the Jazz, with his teammate Karl Malone by his side they formed one of the best 1-2 punch combos of the era.

Stockton went onto record a grand total of 15,806 assists in his career which is almost 4,000 more assists than the next closest player on the list. Stockton also finished his career with a record 3,265 steals, coincidentally enough Jason Kidd is second on both the steals and assists list. Stockton's career was an extraordinary one as he averaged a career double-double, with 13.1 points and 10.5 assists per game. The two time Olympic Gold Medalist also was selected to 10 All Star games before he retired in 2004. The one thing Stockton wasn't able to accomplish in his career was winning a ring, the Jazz did advance to the NBA Finals in 1997 and 1998 only to run into Michael Jordan and the Chicago Bulls both years and would fall just short of the title.  Along with his teammate Karl Malone, Stockton is regarded as one of the best players to never win the title. After he retired in 2004 the Jazz retired his #12, renamed the street in front of their arena John Stockton Drive, and they also put up a statue of him outside of the arena. John Stockton will forever be immortalized as a member of the Utah Jazz and as one of the best players in the history of the NBA as he was inducted into the Naismith Memorial Basketball Hall of Fame in April of 2009.
Posted by Wade Forrester at 3:29 AM