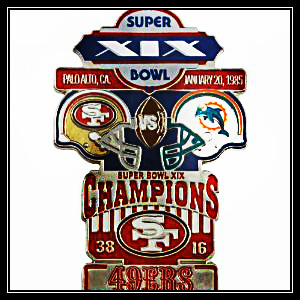 On January 20, 1985, Super Bowl XIX took place at Stanford Stadium in California. It was a heavyweight matchup between the 15-1 San Francisco 49ers against the 14-2 Miami Dolphins. The 49ers led by Head Coach Bill Walsh had a team that featured quarterback Joe Montana, running back Wendell  Tyler, and an offensive line that featured 3 Pro Bowlers. With Don Shula at Head Coach Miami had a few weapons of their own, quarterback Dan Marino had a record setting year as he passed for 5,084 yards and threw for 48 touchdowns, wide receivers Mark Clayton and Mark Duper both exceeded 1,300 yards and they each hauled in more than 70 passes on the year. On the defensive side of the both teams had their stars also most notably defensive end Doug Betters for Miami and cornerback Ronnie Lott for San Fran.

With 84,059 roaring fans in the stands Super Bowl XIX began.  The Dolphins struck first, after forcing a Niners punt, they drove the ball 45 yards in six plays then Uwe von Schamann kicked a 37 yard field goal to give Miami the first points of the day. The Niners responded quickly, after a few quick passes from Montana and a run by Tyler they faced a crucial 3rd and 7 situation, Montana took it in his own hands converting for the first down with a 15 yard run. One play later Montana found Carl Monroe, and the running back took it in for a 25 yard touchdown. Dan Marino and the Dolphins went into a no huddle offense completing 5 straight passes with the last one being a touchdown to tight end Dan Johnson. By the end of the fist quarter the Dolphins led 10-7 and it looked like a shootout was on the way. 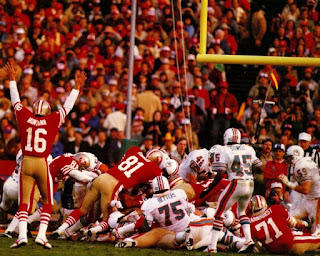 In the second quarter the San Francisco team took control of the ballgame. Bill Walsh made a key adjustment on defense that slowed the Miami passing attack. After forcing a Dolphins punt that was returned to mid field the Niners offense was back to work. Once again Montana worked a little magic with his legs this time scrambling for a 19 yard gain. Then he found Dwight Clark for a 16 yard gain, after a short run by Tyler Montana, nailed Roger Craig for an 8 yard touchdown, they were up 14-10 and there was no looking back. The next time San Francisco got the ball they had great field position right form the start and they didn't wast the opportunity. They started off the possession with Tyler and Craig running the ball, then back to back receptions by tight end Russ Francis that put them at the 11. Craig ran it 5 more yards before Montana ran it in himself from six yards out. Miami quickly went three and out and after San Francisco returned the punt to mid field they were poised to inflict more damage. On the first play of the drive Doug Betters knifed through and sacked Montana for a 5 yard loss, any momentum gained from that sack was quickly subsided after the quarterback hit wide receiver Freddie Solomon for a 20 yard gain. Initially when Solomon caught the ball he was drilled by Dolphins safety Lyle Blackwood causing him to cough it up, it looked like a huge break for Miami but the play was called dead and San Francisco retained the ball. Just 5 plays later Roger Craig punched it in from two yards out extending the lead to 28-10. The Dolphins would find some success late in the 2nd quarter, Marino strung together a drive where he completed 7 of 9 before stalling out in the red zone, it setup another field goal for von Schamann. Then Miami squib kicked the ball straight to San Francisco offensive lineman Guy McIntyre. Instead of falling on the ball McIntyre decided to try and return the ball, it was a decision that he would regret. McIntyre was leveled by rookie running back Joe Carter and he put the ball on the turf, it was snatched up by wideout Jim Jensen and led to another von Schamann field goal. the score was 28-16 at the half and it looked like the Dolphins had momentum swinging their way.

In the second half Miami received the ball and lost any momentum that was gained in that first possession. Right out the gate Tony Nathan was tackled for a loss by 49ers defensive end Dwaine Board. An incompletion by Marino, then he was sacked for a nine yard loss by Board who had come out with his hair on fire.  After another punt that had the Niners at mid field once again they capitalized with a Ray Wersching field goal. The 49ers put the final nail in the coffin late in the third quarter as they capped off a 70 yard drive with a touchdown pass from Montana to Craig. The score was 38-16 and the defenses took over for both clubs the rest of the way, posting goose eggs in the fourth. 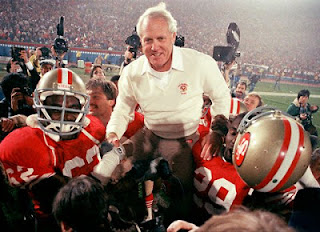 The numbers put up in this game were remarkable. It was the first Super Bowl that both starting quarterbacks threw for 300+ yards. The two teams combined for 851 yards of total offense which was a record at the time. Marino threw for 318 yards with a touchdown and two interceptions, he was truly one of the greatest quarterbacks of his time but would not ever get the chance to redeem himself as the Dolphins never did find themselves in the big game after that season. Montana took home MVP honors with 331 through the air with three touchdowns and 59 yards on the ground with a touchdown. The 59 rushing yards for Montana was a Super Bowl record for a quarterback until 2000 when Steve McNair rushed for 64 yards in when Tennessee lost to St. Louis. It was truly a remarkable performance by Montana and he was well on his way to becoming one of the greatest quarterbacks of all time. The 49ers of the eighties were one of the most dominant teams I can remember, when Joe Montana fell to them in the 1979 draft great things would follow. They won the Super Bowl for the first time with him under center in 1981, then had the victory over the Dolphins in 1984, before winning back to back championships in '88 and '89. When I think of the greatest dynasties in the history of the NFL, that stretch of football in San Francisco might just top the list.
Posted by Wade Forrester at 1:10 PM