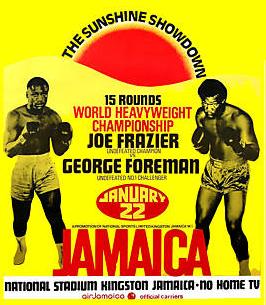 On January 22, 1973, George Foreman took on the Undisputed Heavyweight Champion of the World, Joe Frazier, the fight would be dubbed "The Sundown Showdown" as it was fought in Kingston, Jamaica. Foreman, an Olympic gold medalist in 1968 stood 6' 3" and was a massive human being with great talent. His record was 37-0 coming into the title fight with 34 of those wins coming by knockout. "Smokin Joe" Frazier had won Olympic Gold in 1964 and had an impressive victory against Muhammad Ali in 1971. Frazier came into the match as a 3 to 1 favorite with a 29-0 record, the 24 year old kid nicknamed "Big George" would surprise him and the world. 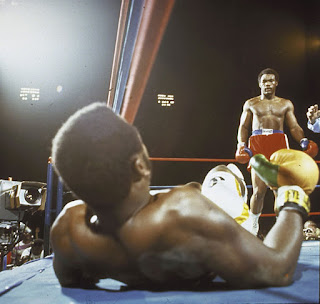 As soon as the bell rang the upset was in progress. Foreman came out pummeling Frazier with a fury of punches ranging from solid body shots, to crushing uppercuts. As Foreman connected with punch after punch Frazier hit the floor for the first time. Announcer Howard Cosell proclaimed "Down goes Frazier!!! Down goes Frazier!!! Down goes Frazier!!!" as Foreman was stunning the world. Just 1:35 seconds into the second round Foreman put him on the ground for the sixth and final time in the bout, Arthur Mercante called an end to the fight, declaring Foreman the winner by technical knockout. The fight may not have been a long battle but it was an epic event as Foreman pulled off the huge upset and became the Undisputed Heavyweight Champion of the World.

Video of the fight:
http://www.youtube.com/watch?v=W9q7mvc6bsY