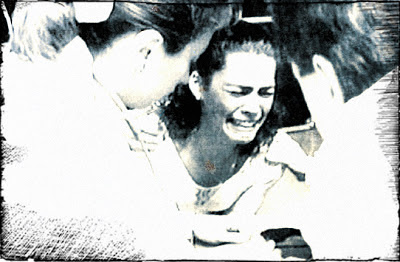 On January 6, 1994, Olympic figure skater Nancy Kerrigan was attacked after finishing up practice at Cobo Hall in Detroit. The attacker had used a metal baton and struck her in the knee, after being attended to by employees of the practice facility Kerrigan's father picked up the injured skater and rushed her to the hospital for x rays where she was treated for a cut, some bruising and swelling then released. This came one day before the skater was supposed to take part in the U.S. National Championships and one month before the Olympics in Lillehammer, Norway. Because of the injuries Kerrigan suffered she had to sit out the U.S. National Championships which would be won by her rival and future Olympic teammate Tonya Harding. Within days of the attack a police investigation led to Harding's ex husband Jeff Gilooly who had conspired with his ex wife's bodyguard Shawn Eckhardt to attack Kerrigan. Gilooly and Eckhardt hired Shane Stant to carry out the attack, with Stant bringing in his Uncle Derrick Smith to drive a getaway car. It was a complex scheme that only blew up in the faces of those involved. 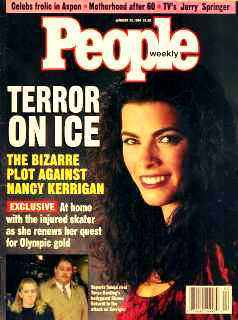 In late January, Harding admitted to knowing the involved parties and even admitted to trying to help cover it up. The Olympic committee tried to take immediate action by suspending Harding only to have the skater threaten a massive lawsuit that forced them to let her retain her spot on the team. I'm sure it was an awkward situation since Kerrigan was also a member of the team. Kerrigan and Harding headed to Lillehammer with a three ring media circus right behind them.


With both skaters trying to put the distraction to the side they took to the ice. Kerrigan did well finishing first in her short program, while Harding didn't fair so well coming in tenth. In the long program Harding stopped her routine, in tears because of a shoe string issue with one of her skates, after she fixed the problem her routine resumed and she finished 8th in that portion of the events. Kerrigan once again outdid her rival by finishing second in the long program and bringing home the Silver Medal. 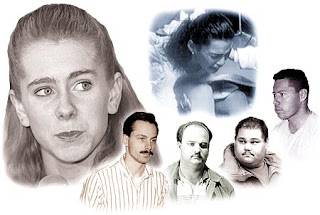 In March of 1994, Harding plead guilty to conspiring to hinder the prosecution of Gilooly and the other people involved, she received 3 years probation and had to pay a $100,000 fine. Harding also had her 1994 U.S. Championship Title stripped from her and was banned from amateur competition for life. Her ex husband and his counterparts didn't get off so easily. Gilooly reached a plea deal and was sentenced to 2 years in prison while the actual attacker Shane Stant and his Uncle Shawn Eckhardt both served a little more than a year in prison before being released.

The scene with Kerrigan in tears asking why is an enduring image that many people will never forget. It was a a sad day in sports that should have never happened. Kerrigan had worked her whole life to get to the point to where she was going to represent the United States in the Olympics, I'm sure it had been a lifelong dream. To have a jealous competitor try and derail her hopes and dreams is beyond belief, what Tonya Harding helped plan was unfathomable, it not only ruined her on the ice it had a lasting impact on her life. If an athlete can't beat their competition fair and square the only thing to do is give a tip of the cap while knowing they gave it everything they could, it's called sportsmanship.
https://www.facebook.com/OnThisDayInSports

Here is a link to a news story that immediately followed the attack
http://www.youtube.com/watch?v=6T09XWRkq5M
Posted by Wade Forrester at 4:49 AM