January 17, 1989: Miami Race Riots Cause The Heat To Cancel Game 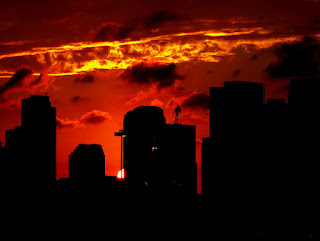 On January 17, 1989, the Miami Heat were forced to cancel their scheduled game against the Phoenix Suns due to race riots in Miami, the Super Bowl was scheduled to be played there within the week. Just one day earlier a Miami police officer attempted to stop a motorcycle for speeding and not coming to a full stop. A police chase would ensue that changed the lives of many. Several blocks from where the chase started was an officer named William Lozano, as the motorcyclist approached  Lozano pulled the trigger to his gun one time hitting Clement Lloyd in the head and killing him. Lloyd was only 23 years old and the passenger on the bike 24 year old Allan Blanchard would later die from the injuries caused by the motorcycle crashing. Both Lloyd and Blanchard were African Americans which caused outrage in the black community, to the point that massive riots broke out in the Liberty City and Overtown neighborhoods in Miami.

Initially the show was to go on, then with the violence nearing the Heat's arena the game was cancelled, just 50 minutes before scheduled tip off. They were two very different teams scheduled to take the court that night, the Phoenix team would get all the way to the Western Conference Finals while the Heat were in their infant years and went 15-67 on the year. That night in Miami it didn't matter what the teams did on the court becasue all hell was breaking loose around them. It took hundreds of officers to bring the rioting under control.  When it was under control the city had sustained more than $1 million dollars in damage, one looter had been killed, 22 injured, and 385 arrests had been made. With violence subsiding the City of Miami held Super Bowl XXIII  just 5 days later. 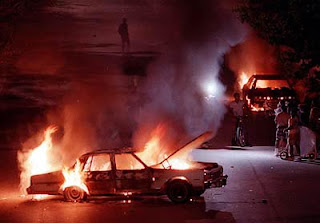 The officer, William Lozano was tried and convicted of manslaughter but would be acquitted during a second trial. The entire incident is a sad one in my eyes. Lozano was only 30 years old at the time of the incident it ruined him financially and his career was gone the second he pulled that trigger. Clement Lloyd and Allan Blanchard were young men, they were classified as street thugs in Lozano's trial. Even if Lloyd was in possession of marijuana and $1,500 in cash I don't think it's fair to go that far. He was a young man that was making stupid decisions by no means does that give a cop a right to shoot and kill him. This is hardly a story about sports as much as it is about how some of the events that happen in the world around us can affect the sports world. Some things are just bigger than those games we wait for with great anticipation. I came close to deleting this whole thing when I realized how sad of a story it is but it happened and the Heat had to cancel a game, in the grand scheme of things, that game just didn't matter. It was a sad week for the City of Miami, I'm sure that those who lived through it don't bring up that game when the subject comes up.

News footage following the riots, a little over 7 minutes long but gives you great insight:
http://www.youtube.com/watch?v=mkEypOL2-3g

https://www.facebook.com/OnThisDayInSports
Posted by Wade Forrester at 11:46 AM