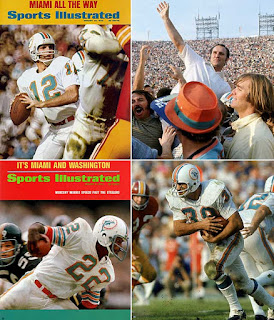 On January 14, 1973, the Miami Dolphins completed perfection as they beat the Washington Redskins 14-7 in Super Bowl VII. Miami was just one year removed from a humiliating 24-3 loss to the Cowboys in Super Bowl VI and many thought it was going to be tough to bounce back from that defeat. They didn't only bounce back, they achieved something that had never been done and hasn't been done since. The road to perfection didn't come easy, in the fifth game of the year starting quarterback Bob Griese broke his leg, this might have crushed most teams but this team was destined for greatness. Journeyman quarterback Earl Morrall did a great job filling in for the injured Griese. It helped that he had a three headed monster of a running game behind him with Jim Kiick, Larry Csonka, and Mercury Morris in the backfield they were a force to be reckoned with, in fact Morris and Csonka both crossed the thousand yard mark on the season making them the first teammates to both rush for 1,000 yards in a single season. After Morrall took over the Dolphins rang off 9 consecutive wins to finish the season a perfect 14-0

Even with the undefeated season there was still work to do if they wanted to redeem themselves from the Super Bowl loss one year earlier. Leading up to the big game they had two hurdles in front of them. The first hurdle was the Cleveland Browns in the AFC divisional round. The Dolphins just got by the Browns after scoring late in the fourth quarter gave them a 20-14 lead, they held on and were on the way to the AFC Championship game. The next hurdle was the Pittsburgh Steelers and it was another closely fought battle that would see Bob Griese return to the Dolphins lineup for the first time since week 5. Griese and his teammates proved to be the better team that day as they went onto win 21-17, punching their ticket to the Super Bowl. 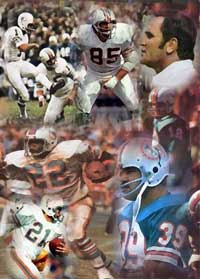 Despite their undefeated record the Dolphins walked into the big game as 3 point underdogs against the Redskins. The underdog role didn't scare the Don Shula coached Miami team. Right out of the gate it was a defensive battle with both teams having to punt in their first two possessions of the game. After getting the ball at their own 37 with just 2:55 left on the clock, Griese walked his team down the field on a 63 yard drive that was capped off with a 28 yard touchdown reception by Howard Twilley. With just one second left in the first Miami had a 7-0 lead. Just three plays into the next Redskins drive Billy Kilmer threw an interception that landed in the hands of Dolphins safety Jake Scott. At this point in the game it looks like frustration was prevalent on both sides, two drives for the Dolphins were killed by penalties with one of those penalties wiping a 47 yard touchdown off the board. When it looked like Billy Kilmer and the Skins were starting to get going Kilmer threw another pick this time it landed in Nick Buoniconti's hands at the Miami 41 yard line, the linebacker returned it 32 yards setting his team up at the Washington 27 yard line. This time the Dolphins would capitalize on the mistake. After two quick runs Griese hit tight end Jim Mandich for a 19 yard gain. Two plays later Jim Kiick slammed it though the Washington defensive line for a 1 yard touchdown. With the score 14-0 at the half the Dolphins were one half away from perfection.

The Dolphins defense had dominated the Dolphins in the first half limiting them to just 49 yards on the ground and 23 through the air. It looked like Washington's coach George Allen had made necessary adjustments early in the second half as the Redskins were able to put together a drive that put them in range for a 32 yard field goal, when kicker Curt Knight sailed the kick wide right which took the wind right out of the sails for Washington. Turnovers haunted both teams, a Miami drive came to an abrupt end with the team just 5 yard away from scoring Griese threw a pick in the endzone. Then early in the fourth Billy Kilmer and the Skins put together a 79 yard drive that put the team at the Miami ten yard line, on a crucial third down play Jake Scott hauled in his second pick of the game, once again Billy Kilmer had shot himself in the foot. The Dolphins quickly moved the ball to the 34 yard line before staling out, Don Shula then decided to send out his kicker Garo Yepremian to attempt a 42 yard field goal. Yepremian's kick was too low and was blocked by Washington defensive tackle Bill Brundridge, Yepremian got to the ball and instead of falling on it he tried to pass the ball only to have it knocked into the air and right into the hands of Redskins cornerback Mike Bass who took it to the house. With only 2:07 left on the clock the 49 yard interception return looked like it gave the Skins new life but surprisingly they didn't go for the onside, instead choosing to kick deep. Washington had to exhaust all of their timeouts in the 5 plays that Miami held the ball before punting it back to them. With just a 1:14 left on the clock, Washington took over with a chance to tie. It just wasn't to be, Miami's "No Name Defense" stood tall knocking down two passes then causing Washington to lose yards on another passing play. With the game on the line defensive end Vern Den Herder sacked Kilmer on fourth down and the undefeated season went into the record books.

It was a game that was won in large part due to the efforts of the famous "No Name Defense" that Miami put out on the field. Defensive lineman Manny Fernandez led the Dolphins with 11 tackles and Jake Scott's two interceptions led the safety to being named Super Bowl MVP. In fact both teams struggled with getting it going in the passing game Griese went 8/11 for 88 yards while his counterpart Kilmer went 14/28 for 104 yards through the air. Kilmer's three interceptions really hurt his team's effort. In the running game Csonka led the Dolphins with 112 yards on the ground and on the Redskins side Larry Brown rushed for 72 yards. It really was a defensive battle that was finished off by Miami.

I have always heard the stories about the guys from that '72 team getting together and raising a glass after the last undefeated NFL team loses a game. Some of those stories might be slightly exaggerated but if they do I don't blame them a bit. In 2007, the New England Patriots came close to being in the same class as those '72 Dolphins after they completed a 16-0 regular season they advanced all the way to the Super Bowl before being knocked out by the New York Giants. By no means am I taking away anything from that unbelievable season for New England but there is only one truly undefeated team in the history of the NFL and they sealed their place in history on this day.

This is a great highlight reel:
http://www.youtube.com/watch?v=hKeZimoIr68

Here is a link to Yepremian's  play it would become known as "Garo's gaffe":
http://www.youtube.com/watch?v=NGC-uGKivvE