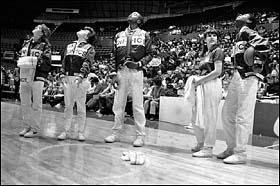 On January 5, 1986, the Phoenix Suns traveled to Seattle to take on the Supersonics. It was a rainy day in Seattle and right from the start there was a huge problem and that was the roof was letting Mother Nature into the Coliseum. With the court soaked there was a 9 minute delay before the two teams took the tip off. The rain continued to come in and the Supersonics staff frantically tried everything they could to stop what was happening, it had all started with a steady drip and by the end of the first quarter it was a steady flow. Just one minute and four seconds into the second quarter Seattle called a timeout, at that point the mess was too much to clean up. The fans in the stands still wanted the teams to play, they stood there umbrellas open chanting. Much to their chagrin, the referees decided to stop the game with the the Suns leading 35-24. They did finish the game the next day with Phoenix winning 117-114.


I have lived through many rain delays in baseball but never heard of such a thing in basketball. I was only able to come up with a couple other times that a basketball game was delayed by rain, both happened in 2008. Wichita and Michigan State experienced a delay after rain was coming through vents and onto the court then the Lakers had a delay after the Staples Center experienced roof problems, both teams were able to resume play after brief delays. I know that if I was in the stands and something like that happened there is a good possibility I would laugh about it. What are the odds of being at a basketball game that is delayed by rain? I'm sure that some of the fans weren't happy about having to go home early that night in Seattle, but I'd bet ya years later they looked back at it and got a good laugh out of it.
Posted by Wade Forrester at 3:21 AM