On January 27, 1991, the Buffalo Bills took on the New York Giants in Super Bowl XXV in Tampa, Florida. The game would be a very memorable showdown that went down to the wire. The Giants led by Head Coach Bill Parcells put up an impressive 13-3 record in the regular season. only to lose starting quarterback Phil Simms in week 15 of the season to a leg injury then suffered a major blow when they lost rookie running back Rodney Hampton in the divisional round of the playoffs. With those injuries it looked like they might slow down the the team, but that wouldn't be the case. Jeff Hosteler a career backup quarterback stepped in under center and 33 year old running back Ottis Anderson took over in the backfield. The Giants team also had an impressive defense that included linebacker Lawrence Taylor who helped the team finish first in the league on defense. The Bills under Head Coach Marv Levy also had a 13-3 regular season and featured Jim Kelly at quarterback, Thurman Thomas in the backfield along with a Andre Reed and Don Beebe at wide receiver the offense would have a remarkable year scoring 428 points leading the entire NFL in offense. The team also had some pretty notable names on the defensive side of the ball like Bruce Smith, Darryl Talley, and Cornelius Bennett. They were truly one of the most dominant teams in the league at the time. 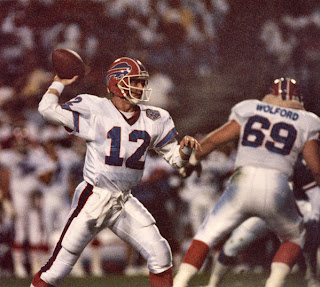 Both teams had a first round bye in the playoffs. The Giants had the #2 overall seed in the NFC and had to face the Chicago Bears in the divisional round, they absolutely destroyed the Bears 31-3 leading them to the NFC Championship game in San Francisco. The Giants squeezed passed the 49ers team with a 15-13 win and punched a ticket to the Super Bowl. The Bills came into the playoffs with the #1 seed in the AFC and had to win an absolute shootout with Miami 44-34 before blowing out the L.A. Raiders 51-3 in the AFC Championship game. With two teams from the state of New York going to the big game it had all the makings of an instant classic before the ball was even kicked off.

With more than 73,000 in attendance the game started off with the Bills receiving the ball first, they were forced to punt. Hostetler and the Giants put together a 10 play, 58 yard drive that would be capped off with a 28 yard field goal from the leg of Matt Bahr. The Bills came right back as Jim Kelly led them the other direction with a 5 play drive, that took them 66 yards which included a 61 yard reception by wideout James Lofton. The drive led to a 23 yard field goal by Scott Norwood and the score was tied at 3-3. After the Giants were forced to punt Jim Kelly put together an impressive 80 yard drive, that took 4 minutes and 27 seconds, with Andre Reed hauling in 4 receptions for 44 yards before running back Don Smith punched it in from one yard out, the Bills were up 10-3. After trading punts,the Giants found themselves deep in their own territory at the 7 yard line, Hostetler hit Anderson for what should have been a 7 yard gain but a holding penalty brought it right back to the 7. One play later Hostetler got tripped up and Bruce Smith tackled him in the endzone for a safety, putting the Bills up 12-3, it looked like the they were in control. The Giants answered back late in the 2nd quarter with a huge 87 yard drive that was finished off with a pass from Hostetler to wideout Stephen Baker for a 14 yard catch and score. With just 25 seconds left in the half the Bills lead had been cut down to 12-10 and momentum had definitely shifted toward the Giants. 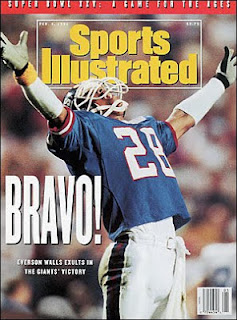 The Giants looked dominant when they came out after the half. Hostelter led his team on a 14 play, 75 yard drive that included a crucial third down conversion a huge 24 yard field goal by Anderson. Then an absolutely great effort by wide receiver Mark Ingram, who broke multiple tackles on another third down conversion. After even another third down conversion from Hostetler deep in Bills territory Ottis Anderson scored from one yard out and gave his team a 17-12 lead. When the Bills took over on offense things continued to unravel for the team, to the point that they found themselves facing a 4th and 25, which forced them to punt from their own 38. Their punter Rick Tuten put the ball up in the air and it only traveled 20 yards giving the Giants a short field as they started form their own 42. Momentum shifted back toward Buffalo when New York attempted to convert on 4th and 2. Hostetler handed off to Anderson and Bruce Smith stuffed him for a two yard loss, it gave Buffalo an opportunity that wouldn't be wasted as they headed into the fourth quarter. The Bills stormed down the field, going 63 yard in just four plays, with almost half of those yards coming on a 31 yard touchdown run by Thurman Thomas. The Bills led 19-17 but this one was far from over. The Buffalo defense was being stretched thin with their offense working so fast, they could barely catch their breathe before they were back on the field trying to stop the Giants offense. While the Bills worked quickly the Giants put together another long drive. This time it was a 14 play, 74 yard drive that stalled out in the redzone, but still led to a field goal for the Giants. With New York up 20-19 they forced a Buffalo punt and took back over before having to punt the ball back to their opponents. With just 2 minutes and 16 seconds left on the clock, the Bills took over at their own ten yard line. They tried desperately to put themselves in field goal range. Kelly scrambled twice for a gain of nine yards, then Thurman Thomas ran the ball on a draw play out of the shotgun formation for 22 yards, converting on 3rd and 1. A quick strike to Reed and another run by Kelly put the Bills in Giants territory. Kelly hooked up with tight end Keith McKellar then Thomas ran it another 11 yards, that put them at the Giants 29, Kelly spiked the ball with just 8 seconds left on the clock and the offense had put themselves in position to win the game with a field goal. Scott Norwood stepped up for the 47 yard attempt and had plenty of distance in his kick but it sailed wide right of the goalpost and the New York Giants were Super Bowl Champions. 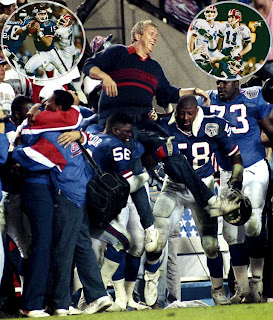 It was the first of four consecutive Super Bowl appearances for the Buffalo Bills, however they were never able to finish off the season with a Super Bowl victory. They were an absolutely great team that unfortunately might be remembered best for getting there but not winning it all. I'm sure it left a void in a lot of the players on that roster. I hope the fans in Buffalo appreciated how great of a team they were because every other team in the AFC would have killed to be in their position. When it comes to the Giants they came into the game as 7 point underdogs but did a masterful job of controlling the clock and executed a defensive game plan that ultimately brought The Lombardi Trophy to New York. I was just a kid when this game was played and I'll never forget it. The ball sailing just wide of the goal post is lasting image that broke the hearts of Buffalo fans while Giants fans rejoiced. It was a classic.

Video from the final minutes of the game:
http://www.youtube.com/watch?v=roNCS5ubfWk