January 13, 1968: Bill Masterson suffers an injury that would end his life 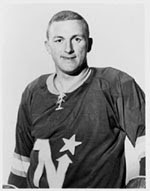 On January 13, 1968, at the Met Center in Minnesota, Bill Masterson of the North Stars suffered a head injury that would prove to be fatal. Just four minutes into the contest against the Oakland Seals, the 29 year old Masterson completed a pass to his teammate Wayne Connelly, he was then checked by Oakland's Ron Cahan and Ron Harris. The hit caused Masterson to fall backwards and hit his head on the ice. He had suffered a massive brain hemorrhage. Just two days later he passed away. Masterson is the only player to die because of injuries directly related to an NHL hockey game.

Masterson, a Winnipeg native went onto become a star player at the University of Denver where he lead the Pioneers to championships in 1958, 1960, and 1961. After graduating from college he was signed by the Montreal Candiens. He never did get a shot in Montreal because the team had so much depth. He spent several years playing minor league hockey before deciding to take a job with the Honeywell Corporation, a manufacturer of civil and military avionics and other aerospace products. In 1967, the NHL doubled in size and the expansion North Stars gave him a shot to achieve his lifelong dream of playing professional hockey. He made an instant impact on October 11, 1967, Masterson scored the first goal in the history of the North Stars franchise. Masterson would only play in 38 games before it all came to an abrupt end for the promising young player. Since his death no other player has worn his #19 for the North Stars, in 1987 the team retired it permanently just six years before they moved to Dallas.

Following the '67-'68 season the NHL started giving out the Bill Masterson Memorial Trophy, the award is given to a player that displays perseverance, sportsmanship, and true dedication to the sport of hockey which were all qualities of Bill Masterson. He persevered by achieving his dream, by all accounts he was a better person than a player and while his dedication to the game might have cost him his life he died doing something he loved. The award is often given to a player that overcomes a serious injury or illness and is able to return to the game successfully. Any player that receives the award should be sure and know that the name on it belongs to a man that literally gave his life to play the game that they all know and love.

Masterson's death led to widespread lobbying for players to wear helmets. It wouldn't be until the 1979-'80 season that it became mandatory for players to wear helmets, any player that played before that season had the right to choose whether to wear one or not. When I look up facts for On This Day In Sports I very rarely go with anything that involves the death of a player. In this case I didn't know the story of Bill Masterson, I had heard of the trophy but never knew the story of the man. I almost chose not to use this fact but I looked at his historical impact on the game and thought, while it is a very dark moment in pro sports, it can also be a way to remember the man. It wasn't only hockey who lost Masterson, he was a young father who I'm sure was loved by many.

Here is a great video that tells the story of Bill Masterson:
http://www.youtube.com/watch?v=dh_uLi6Bf7s

Here is a link to an archive of the St. Paul Dispatch immediately following his death:
http://www.northstarshockey.com/clip1.htm