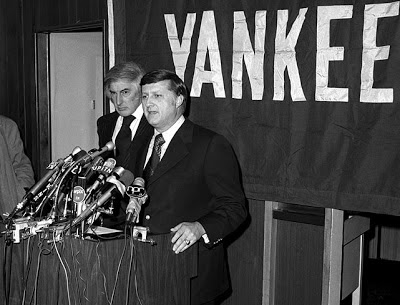 On January 3, 1973, a Tampa Bay businessman by the name of George Steinbrenner led a group of investors in purchasing the New York Yankees from CBS for an estimated $10 million dollars. "The Boss" would go onto become one of the most iconic figures in all of Major League Baseball. 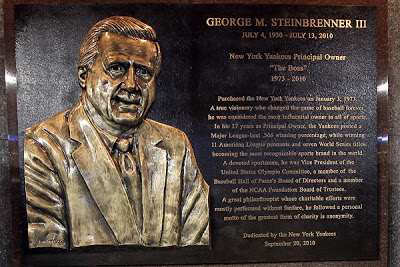 Born in Ohio in 1930, Steinbrenner came from a hard working upper middle class family. His father Henry instilled in him a strong work ethic from a very young age. Instead of an allowance Henry would pay his son with chickens and even as a child George had a businessman state of mind. At just 9 years old he started the George Company selling eggs door to door, he was so successful that he passed the business onto his sisters Susan and Judy when he headed to Culver Military Academy in 1944. After graduating from the academy George went to Williams College in Massachusetts, the young Steinbrenner would become a star track athlete as well as the school's sports editor for their newspaper. George was very active in several other areas of the school before earning his bachelor's degree in English in 1952. After he graduated he joined the nations military as a member of the Air Force. When he landed an assignment at Lockbourne Air Force Base in Ohio, Steinbrenner headed up a sports program for the base and started a coffee stand business that grew to six pick up trucks that were all bringing him income.


Steinbrenner was discharged from the military in 1954. He went onto Ohio State, where as graduate assistant to legendary football coach Woody Hayes he attempted to earn his master's degree in physical education. While at Ohio State Steinbrenner took on some assistant coaching duties, which led to similar positions with Northwestern and Purdue universities. In 1957, at the urging of his father, George joined the family business in the shipping industry. The business had been struggling to survive until George came aboard, after helping the company return to profitability, George bought the business from his family, then would lead his company into greater business ventures that turned Steinbrenner into a millionaire. 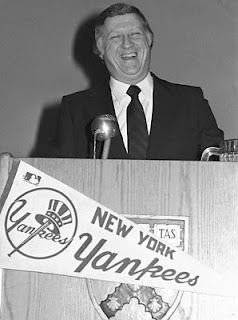 In 1960, Steinbrenner dove into the ownership side of the sports world by purchasing the Cleveland Pipers of the American Basketball League, while the franchise had short term success in winning the championship in 1962 the ABL would fold later that year and Steinbrenner lost more than $25 million on the deal.  Even with the his entry into ownership being less than spectacular, a seed had been planted that would lead to much greater things for Steinbrenner. George invested into several Broadway shows while still running the shipping company, that made him wealthy. In 1972 he attempted to buy the Cleveland Indians, after the deal fell through he set his sights on the New York Yankees. Just imagine how different history would be if the deal for the Indians would have happened. The Yankees had been one of the most successful teams in all of baseball, but after CBS purchased them in 1964 the team struggled on the field and saw a steady decline in attendance. With Steinbrenner and his group of investors coming in they made key moves in signing Catfish Hunter and bringing in Billy Martin to manage the team. It looked like things were about to turn around for the franchise. However it wasn't all easy sailing for The Boss, in 1974 he was convicted of contributing illegal funds to the campaign of Richard Nixon while he was only fined $15,000 he was suspended from baseball by commissioner Bowie Kuhn for 15 months. 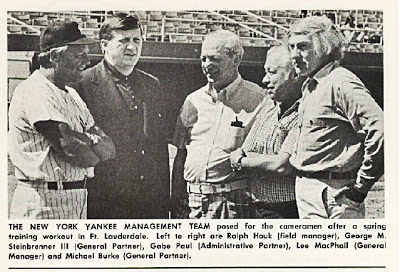 When he returned from the suspension he helped turn the Yankees into a contender. In 1976 they went all the way to the World Series. and even though they lost to the Cincinnati Reds the people of New York were excited about the Bronx Bombers for the first time in a long time. Through the years some of the best players in all of baseball migrated toward New York, with Steinbrenner signing big names like Catfish Hunter and Reggie Jackson there was big money to be made in the Bronx.  The first time Steinbrenner was a champion as an owner came in the 1977 season, when the Yankees beat the Dodgers in 6 games. It was the 21st championship for the franchise and it was the first time since 1962 the Yankees owned the title of World Champions. Then in '78 the team came back from a 14 1/2 game deficit in mid July, forcing a one game playoff with their biggest rival the Boston Red Sox. After taking care of business with the Red Sox the Yankees went on another championship run, eventually beating the Dodgers in six games, it was back to back rings for Steinbrenner's club and times were good in New York. 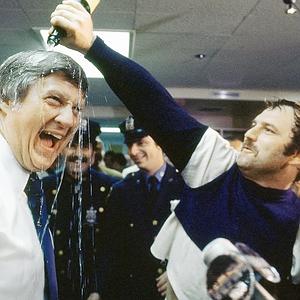 The late seventies and early eighties would have both triumph and tragedy for the team. In August of 1979, they lost their star catcher Thurman Munson after the plane he was piloting crashed, the team finished fourth in their division. In the grand scheme of things it just didn't matter, because they had lost a comrade. They did come back the next year and won the AL East, in a dogfight of a race. They beat out the 100 win Baltimore Orioles by winning 103 games in the Bronx. Only to  lose to the Royals in the ALCS, I do think it qualified as a pretty successful season. In the strike shortened year of 1981 the Yankees led the AL East right up until the strike shut down of the league on June 12th. When the strike concluded and play resumed on August 9th the Yankees didn't look like the same team. They had went 34-22 in the first half, but they couldn't crack .500 in the second half as they went 25-26. The strike year pitted the first half winner against the second half winner in a special American League Division series and Steinbrenner's Yankees prevailed over the Milwaukee Brewers. They would send the A's home by beating them in the ALCS and find themselves facing the Dodgers in the World Series, where they lost in 6 games. Steinbrenner came out and apologized to the city of New York for the performance of his team. It was widely criticized and rightly so, they had just reached the top of the mountain and even though they fell short, that is just how baseball goes sometimes. 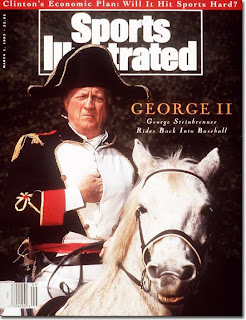 It would be a years before the Yankees returned to the postseason. They fielded some great offensive teams but couldn't put it all together to become the mighty powerhouse they once had been. Steinbrenner had a tendency to make his displeasure heard through media outlets, which makes it safe to say that not everyone liked him. The most infamous incident involving Steinbrenner was with Dave Winfield. When Winfield sued the club for $300,000 after Steinbrenner failed to contribute money he had promised to The Dave Winfield Foundation, a battle was on between the player and the owner. With the feud between the two at its peak Steinbrenner hired a man to dig up dirt on Winfield in hopes that he could ruin him. What happened was it all fell apart with people coming forward that acknowledged Steinbrenner was involved in a conspiracy against the player. The commissioner of baseball Fay Vincent had no choice but to suspend the owner on the 30th of July in 1990. 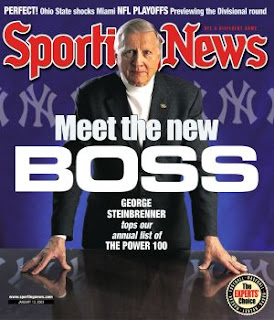 When he returned in 1993 the Yankees would have some great seasons. In '94 they were leading the division only to have another baseball strike wipe out the season in mid August. In '95 they returned to the playoffs for the first time since 1981, they lost to the Mariners in the Division Series but the pieces were being put into place that would turn them into a modern day dynasty. They hired Joe Torre and brought up a multitude of star talent that included Bernie Williams, Jorge Posoda, and Derek Jeter. What followed was a Championship in 1996 then they  would go onto win more rings in 1998, 1999, 2000, and 2009. When Steinbrenner passed away in July of 2010 he might have been one of the best known and successful owners that baseball had ever seen, his sons are currently in control of the club.


While he had his controversies through the years, it's safe to say he was one of the most iconic men to ever own a sports franchise, and not just any sports franchise we are talking about the New York Yankees. While he might have been a little too vocal with the media and at times he even made it look as if he was running a 3 ring circus, he was still very dedicated to the success of his franchise. As of 2012 the $10 million dollar investment Steinbrenner made in 1973 was valued at $1.6 billion dollars. Generations well passed ours will know the name George Steinbrenner, he was an icon and one of the biggest figures in professional sports for more than thirty years.

https://www.facebook.com/OnThisDayInSports
Posted by Wade Forrester at 3:03 AM