January 29, 1980: Cavaliers beat the Lakers in a quadruple overtime thriller 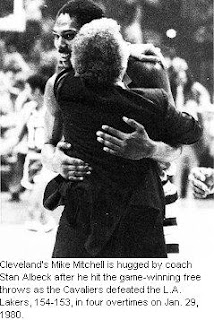 On January 29, 1980, the Los Angeles Lakers took on the Cleveland Cavaliers in Cleveland, Ohio. It was a contest that took four overtimes to decide a winner with the Cavs coming out on top 154-153. The Lakers were led by Kareem Abdul Jabar's 42 points, and had 7 players with double figures. While the Cavaliers had 3 players with more than 30 points each. The game was decided by forward Mike Mitchell with just two seconds to go in the fourth overtime, when he drained two free throws. It is considered to be one of the best regular season wins in the history of the Cavaliers organization.

It was by far the highlight of that season for the Cavaliers, as they went 37-45 on the year and missed the playoffs. The Lakers on the other hand were able to put the loss behind them and went onto put up a 67-22 record on their way to winning the NBA Championship in 1980. It would be the first of 5 Championships for the Lakers in the eighties and the first Championship under new owner Jerry Buss. I think it's safe to say that every fan that bought a ticket to the game that night was treated to one helluva ballgame. It took 68 minutes to decide a winner and in the moment the Cavaliers were victorious I'm sure the roar of the crowd in the Coliseum at Richfield damn near brought down the house. 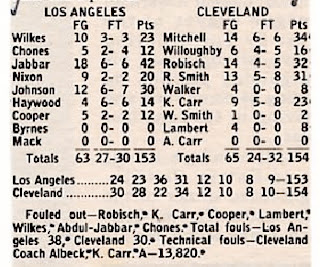 Here is a look at some other historically long games in the history of the NBA:
http://sports.yahoo.com/nba/news?slug=ycn-8471981
Posted by Wade Forrester at 11:49 AM