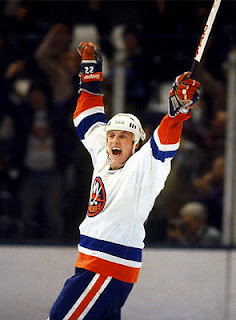 On January 24, 1981, Mike Bossy of the New York Islanders became just the second player in NHL history to score 50 goals in just 50 games. It hadn't been accomplished since Maurice "Rocket" Richard did it in the '44-'45 season. As a rookie in 1978 Bossy scored a rookie record 53 goals on his way to winning the Calder trophy as rookie of the year. Bossy was a key part in the Islanders dynasty of the early eighties, as they won 4 Stanley Cup Championships from 1980 to 1983. In the '82-'83 season he recorded 83 assists a record for a right winger. What he was doing was simply astounding, for a kid that fell to the middle of the first round and many thought he wouldn't cut it at the highest level, he was proving them wrong, not only could he make the cut he was going to be one of the top players in the league. 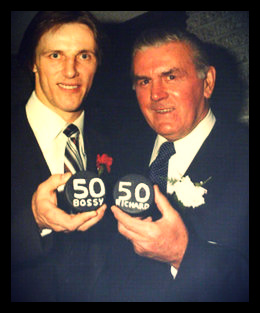 Bossy had read about Rocket Richard's accomplishments from a very early age and even told friends before the that 50 in 50 was the feat he hoped to accomplish. When he got to 40 goals in 41 games Bossy told the press "Rocket's record is what I'm aiming for", the race was on. In a two week period he brought he the total up to 48 goals in just 47 games, a media frenzy followed. In game 48 the Islanders  spanked the Calgary Flames 5-0 but Bossy wasn't able to score with the Flames putting all their focus on stopping him. It pissed off quite a few of the Islanders players that Calgary's main goal wasn't to win the game it was to stop Mike Bossy, sort of a bush league move on their part. They put that game behind them and moved onto Detroit. The Red Wings didn't use the same tactics as the Flames but they still covered him well keeping him scoreless, Bossy even missed two prime opportunities for empty net goals in that contest. Still stuck at 49 goals he had one more chance to achieve what the Rocket achieved. 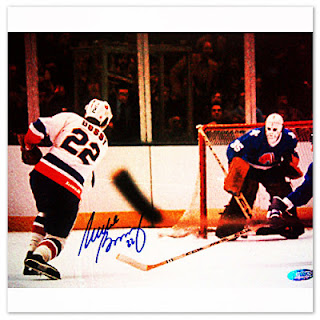 Game #50 was at home against the Quebec Nordiques and things weren't looking good through the first two periods for Bossy, he hadn't even put one shot on goal. He sat in the locker room in the third period with his stomach tied in knots and even admitted to almost giving up on the idea and just staying in the locker room, it's a good thing he cleared his head and jumped back out there. He later acknowledged he had played terrible in the first two periods then found his game in the third. Even though he was skating much better and he started putting some shots on goal Bossy still hadn't scored with just a little more than 5 minutes to go, the time was now. Bossy came out on the power play and took a pass from Bryan Trottier and Stefan Personn then flipped it in with a backhand shot passed the Nordiques goalie Ron Grahame, he had just notched #49 and knew that 50 was right there. Bossy had new life and destiny was on his side, with just 1:29 to go he took a perfect pass from Trottier and shot it straight through the 5 hole for goal #50. All 15,008 fans at the Nassau Coliseum went crazy as he reached the milestone that hadn't been done in 36 years. With the Islanders up 6-4,  he did have his opportunity to surpass Richard's mark but chose to pass it to Trottier who finished off the 7-4 win for the Islanders. When asked about it later he said he owed it to Trottier, very classy on Bossy's part. Rocket Richard was on hand to congratulate the player and Bossy was more than gracious to have the legend in attendance. It was an absolute great night in the history of the NHL. Bossy would score at least 50 goals 5 more seasons following that historic season but never in less than 60 games. He retired in 1987, then was inducted into the Hall of Fame in 1991. Mike Bossy is one of those players I would have loved to see with my own eyes. Just looking over his numbers just makes you know it was beyond exciting to watch that guy, in that season he scored 50 in 50 those fans in New York and the fans of the NHL were treated with one magical season by one helluva player.
Posted by Wade Forrester at 11:43 AM