On January 21, 1969, Stan Musial was elected to the Hall of Fame in his first year of eligibility.  Musial was born in the steel town of Donora, Pennsylvania which is where he first picked up a baseball. After playing the game with his brother Ed and friends Musial joined a semi pro team in Donora called the Zincs.Originally he was a pitcher and that is what got him discovered by a one of the Cardinals' scouts. In 1937 the team signed him to a minor league contract and the rest is history. After a shoulder injury in the minors Musial was moved to the outfield. He excelled in the minors with his famous cork screw stance and was called up to the majors September 17, 1941. In his short stint with the Cardinals late in the '41 season he was impressive, hitting .426 in 12 games. It was just a sign of the great things to come. 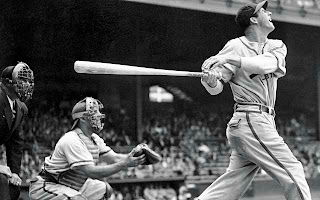 What followed was the one of the greatest careers to ever be played in a Cardinals uniform. Musial spent his entire 22 year career with the St. Louis Cardinals hitting 475 home runs while recording 3,630 hits with 1,815 of them coming at home and 1,815 on the road he was a model of consistency. The list of accolades are long at the time of his retirement he held 17 Major League records, 29 National League and 9 All Star Game records. The list of accolades is long, he played in a record  24 All Star games was a 3 Time World Champion as well as a 3 time National League MVP. It doesn't stop there, in 1945 he missed an entire season when he joined the service, like many of his peers at the time serving their country was bigger than any game they would ever play. In 1948, Musial was just one home run shy of winning the triple crown, something he would have accomplished if it wasn't for one home run not counted becasue of a a game being rained out. In 1954, Musial hit 5 home runs  in a doubleheader which was only accomplished one other time in 1972 when St. Louis native Nate Colbert hit 5 jackertons in a double header for the San Diego Padres. In 1957, Musial became the first $100,000 player in the National League. When he had an off year hitting just .259 in 1959 Musial insisted that the team only pay him $80,000, something that would be unheard of today. Musial held a high standard for himself and wanted to prove he was worth the money he was paid. He bounced back with a .275 year in '61 then in '62 he brought his average up to .330. Musial played one more season in '63 before retiring, while his playing days were over the impact he would have on St. Louis is something that is still felt to this day. 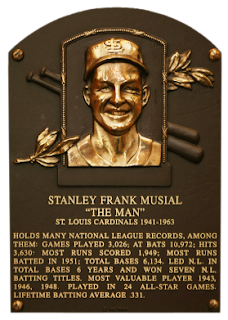 As many of you know I was born and raised in St. Louis and Cardinals baseball is part of who I am. I have always admired Stan Musial, in fact there is no other player I admire more than him and there never will be. The incredible thing about my admiration of Stan Musial is it goes well beyond what he did on the field, he was truly a great human being. As we celebrate the life of Martin Luther King Jr. today it should be noted that Musial openly supported African American ballplayers like Jackie Robinson and Hank Aaron. Stan never looked at any person and judged them by their color he judged them as people and would go out of his way to make sure they knew he respected them as men. There are tons of great stories about how well he treated people, from taking some time to talk to the customers at his restaurant to keeping his phone number listed for several years taking phone calls from fans at all hours of the night. With the passing of Stan Musial this week I could not pass up my opportunity to pay my respects to Stan, he truly was The Man. When he was inducted into the Hall of Fame he said "I hope I gave baseball as much as it gave to me", he undoubtedly gave baseball and the world around him everything he had.

Here's a short video from the Baseball Hall of Fame:
http://www.youtube.com/watch?v=rt4JjH9Gf-o