On January 30, 1983, at the Rose Bowl Stadium in Pasadena, California, the Washington Redskins beat the Miami Dolphins 27-17 in Super Bowl XVII. It was a very different road to the Super Bowl for both teams because the strike shortened season in 1982 reduced the schedule from 16 to 9 games and the standard playoff formats were thrown out, instead the top eight teams from each conference went to the playoffs seeded 1 through 8. The Redskins under second year Head Coach Joe Gibbs dominated the short season posting an 8-1 record and landing the #1 seed. The Dolphins led by Don Shula posted an almost equally impressive 7-2 record and landed the #2 seed in the AFC. Both teams would have to earn their way to the big game as the Dolphins beat the Patriots, Chargers and Jets while the Redskins took care of the Lions, Vikings, and Cowboys. It was a rematch of Super Bowl VII, the year the Dolphins completed the only perfect season in the history of the NFL. This time the Redskins would prevail. 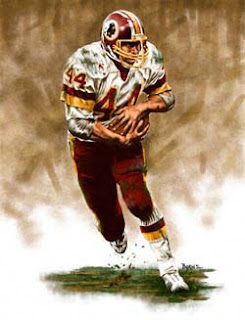 They were two very different teams coming into the big game. The Dolphins passing attack led by quarterback David Woodley ranked last in the league but they did have a decent running game with Andra Franklin and Tony Nathan and a great defense to offset what they lacked in the passing game. With one of the best offensive lines of the era nicknamed "The Hogs" controlling the line of scrimmage the Redskins had Joe Theismann under center and he finished the season as the top rated passer in the NFC. Theismann had two great receivers that helped him achieve that in Charlie Brown and Art Monk and to compliment the passing game a 33 year old fullback named John Riggins led the way on the ground and he would shine in the postseason rushing for 444 total yards in the three playoff games leading up to the Super Bowl.

With more than a 100,000 screaming fans in attendance the game was sure to be a battle that would not be forgotten. The Dolphins struck first on their second possession of the game with a 76 yard bomb from David Woodley to Jimmy Cefalo. After they forced the Redskins to punt, Woodley tried another long pass only to be laid out by defensive end Dexter Manley who caused the quarterback to fumble, it was then snatched up by defensive tackle Dave Butz, which in turn led to a 31 field goal for the Skins. Miami didn't let the momentum stay with their opposition long. After a big 42 yard kick return from Fulton Walker the Dolphins were setup at their own 47. They drove it all the way down to the 3 yard line before settling for a field goal of their own. The short drive took 13 plays and more than 8 minutes before they had to settle for the field goal that gave them a 10-3 advantage. Washington answered right back with an 11 play 80 yard drive that featured four runs, as well as, a huge 15 yard reception by John Riggins. The drive was capped of with a 4 yard touchdown pass to wideout Alvin Garrett  in the corner of the endzone, knotting it back up at 10 apiece. The tie didn't last long, kick returner Fulton Walker took the ensuing kickoff 98 yards to the house and put the Dolphins back on top with a 17-10 lead, which they took into the locker room at the half. It was the first kickoff return for a touchdown in Super Bowl history. 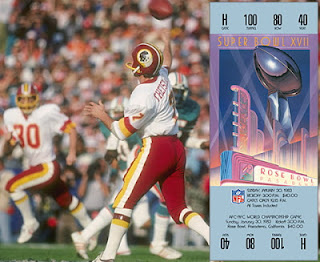 Once the second half got underway the teams traded punts. Washington looked like they had something going as they reached midfield then Theismann handed off to Alvin Garrett on a reverse that he took 44 yards and put the Skins at the 9 yard line, they failed to punch it in for 6, as the Dolphin defense stood tall in the redzone, but still walked away with a field goal and narrowed the gap between them and their opponent.  Later in the third quarter Theisman was intercepted by linebacker A.J. Duhe only to have Woodley throw an interception minutes later and give it right back to the Skins. Theismann returned the favor by throwing another pick at the 1 yard line. It was the first time in Super Bowl history that three consecutive drives ended with interceptions. Luckily that was the end of the interception festival and in a way the last interception by the Dolphins hurt them. They only moved the ball a couple of yards before having to punt, which gave the Redskins great field position at their own 48. After 3 quick runs by Washington, that put them at the Dolphins 43 yard line, they face a fourth and one. It  might have been the most important play of the entire game as Joe Gibbs decided to go for it. Gibbs called for a run from Riggins and the fullback gave him a lot more than a first down as he went the distance and put Washington up 20-17. There would be no looking back for Washington as they controlled the rest of the game defensively and offensively.  The Dolphins were forced to punt multiple times, then they controlled the ball well as Riggins pounded it up the gut of the Dolphins defense. In the fourth quarter Theismann and company put together a long drive that led to a touchdown reception by Charlie Brown it was the nail in the proverbial coffin. With the score 27-17 and under two minutes to go, Shula put in his backup quarterback David Strock, but  he couldn't save the day and the Redskins were Super Bowl Champions. 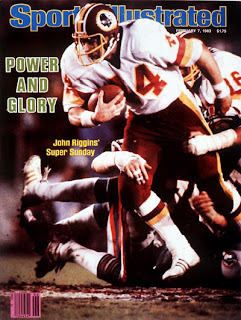 It was a battle that was dominated in the second half by Washington as they won their first championship since 1942. Riggins would prove to be the MVP with 166 yards on the ground as well as a key 15 yard reception in the game. When it was all said and done Riggins had rushed for 610 yards in the postseason, simply astounding. The 33 year old played a few more years in Washington before hanging up the cleats. He was inducted into the Hall of Fame in 1992 and I'm sure that Hall of Fame performance in the Super Bowl helped that happen. Joe Gibbs led his team back to the Super Bowl the following season where they lost to the Raiders, it still proved to be very good times in Washington. Under Gibbs they won the Super Bowl in 1987 and in 1991 which led Gibbs to being inducted in the Hall of Fame, while he did return to the Redskins in 2004 he wasn't able to have the same success he had earlier in his career. Regardless, Joe Gibbs and John Riggins both Washington Redskins legends that had one great day on January 30, 1983.

Highlights from the game:
https://www.youtube.com/watch?v=M002MHBkZ_A