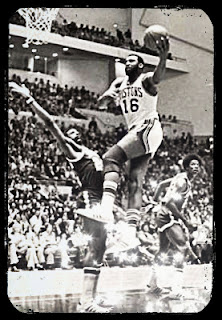 On January 9, 1993, the Detroit Pistons retired Bob Lanier's number 16. After an outstanding college career at St. Bonaventure, Lanier was drafted #1 overall pick by Detroit in 1970. He quickly became a force in the league. By the end of his first season he was selected to the NBA all rookie team. The 6' 11" center brought excitement to the Detroit Pistons and they saw an instant rise in attendance. Following his rookie season Lanier scored more than 2,000 points and was named to his first all star game. In the '73-'74 season he helped lead Detroit to the playoffs where they were knocked out by the Chicago Bulls in the Western Conference Semi Finals in 7 games. While the team reached the playoffs for three more seasons following that run, they never did get passed the semi final round. Early in the '79-'80 season the Pistons were struggling under the new head coach Dick Vitale. Lanier could see that his time in Detroit might be coming to an end and by mid season he asked to be traded. The General Manager of the team then dealt him to the Milwaukee Bucks for Kent Benson and a first round pick. When he packed his bag to leave Detroit he said "I asked for that trade but my blood and guts were Pistons", I'm sure it was a tough thing to leave the team he had been a part of for so long. Lanier holds the Pistons record for average points per game with 22.3, his 8,063 rebounds are second in the team's history, and his 15,488 in a Detroit uniform ranks third in franchise history. 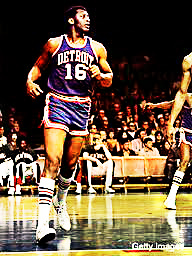 Lanier was a solid player in Milwaukee as well, in his 5 years with the Bucks he helped them win 5 Division Championships but wasn't able to reach The NBA Finals. He did come close with his team reaching the Eastern Conference Finals in his last two years in the league but could never get over that hump. When he retired in 1984 he had scored 19,248 points and also grabbed 9,698 rebounds. It was a remarkable 14 year career that led Lanier to not only having his number retired by the Pistons and the Bucks he also found himself as a member of the Naismith Basketball Hall of Fame. If you visit Basketball's Hall of Fame in Massachusetts  you can compare your foot to the massive skis that Lanier wore, his size 22's were inducted before the player was.

Lanier is one of the players that had a great career but never won the title and it pained him greatly. The year he retired he said in an interview with the Milwaukee Sentinel "I accomplished most of the individual goals I could ever dream of in the game". He went onto say "But the ultimate reward is to be crowned champions. And if you don't know what that feel is, I think it leaves a void." I'm sure that void is something that stays with a player throughout their lifetime, even though it is there, it does not take away from their accomplishments for me. Lanier was a great player that the Pistons, Bucks and the entire basketball community made sure to immortalize his name.