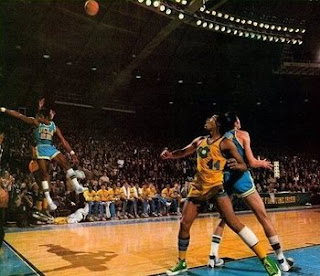 On January 19, 1974, in South Bend, Indiana, the longest winning streak in the history college basketball came to an end when Notre Dame knocked off the UCLA Bruins by the score of 71-70. It was the end to one of the most remarkable winning streaks in the history of sports. Before the game even started it was sure to be a good one with UCLA ranked #1 and Notre Dame #2, both teams were undefeated on the season. The Bruins led by legendary coach John Wooden and future Hall of Famer Bill Walton looked like they were about to grab their the 89th consecutive victory. With just three and a half minutes left in the game UCLA was ahead by 11 points then Notre Dame turned it on with a press defense that threw the Bruins off guard.  After scoring 10 consecutive points and an offensive foul by the Bruins, The Irish went right back down the court, Gary Brokaw ditched the ball to Dwight Clay and he hit a jumper from the right corner that put Notre Dame ahead for the first time in the game 71-70, it was gettin crazy in South Bend. After a quick timeout for the Bruins they scrambled down the floor desperately trying to score but Notre Dame's defense stood strong. With just 6 seconds left the Irish knocked the ball out of bounds giving the Bruins one last shot at winning it, it just wasn't to be, they inbounded the ball to Walton and he made an attempt to hit the game winner then several rebounds later Notre Dame got their hands on the ball and the 88 game streak was over. The 11,623 in attendance erupted, running onto the court mobbing the coaches and the players. 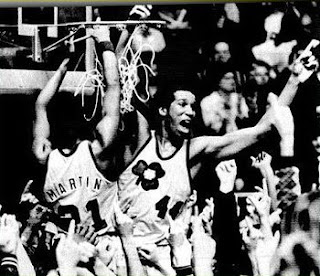 It was an unbelievable finish to an unbelievable run. The Fighting Irish led by head coach Digger Phelps had pulled off a monumental win. Phelps created a mindset that they were going to beat the UCLA team. Going as far as, having his team rehearse cutting down the nets, in the days leading up to the event, some of his players even said they thought he was crazy. It's safe to say the Bruins were a confident bunch and they should have been, early in the game they took a commanding lead and talked a little smack, in the end that might have helped motivate rather than intimidate the Irish. By the time the score was 70-59 and a little over three and a half minutes left, Phelps called a timeout and let his team know what was on his mind when he said "If you don't think we can win, get out of here. Go shower right now." he lit a fire that burned hot under the asses of his players and they executed their game plan to perfection. It was a defining moment in the career of Digger Phelps. 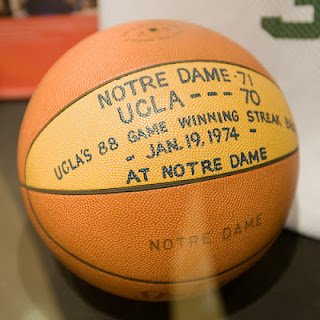 The players on the court gave it everything they had. Bill Walton was coming off a back injury, he had missed 3 games and took to the floor that night with a back brace on, despite that fact, he scored 24 points and grabbed 9 rebounds for UCLA. Notre Dame's Gary Brokaw scored 25 points and his teammate John Shumate drained 24. The star of the game Dwight Clay only scored 7 points in the contest, and the only two points he scored in the second half made him the hero of the day. Ironically the last time the Bruins lost it happened on the same floor when Notre Dame knocked off  UCLA on January 23, 1971. What followed the '71 loss to Notre Dame was arguably the most remarkable winning streak in the history of sports. Those UCLA teams led by John Wooden might have been the best college teams to ever step on a basketball court. Just to think about a team winning 10 National Championships in a 12 year span is simply astounding. As dominate as those Bruins teams were, on that day in 1974 Notre Dame was #1.

Great footage from the game:
http://www.youtube.com/watch?v=hLfCdIU3dC4

https://www.facebook.com/OnThisDayInSports
Posted by Wade Forrester at 3:24 AM