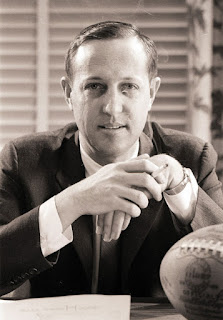 On January 26, 1960, Pete Rozelle was chosen to be the new commissioner of the NFL. The decision came after the passing of Bert Bell, who had held the post since 1945. Rozelle, a native Californian, Rozelle got his start in the sports world after serving in World War II. He returned home, enrolled in junior college and soon found a part time position in the publicity department of the Los Angeles Rams who had just moved to town from Cleveland. After transferring to University of San Francisco he helped bring their basketball program national attention while working as the new athletic director for the school. By 1952 he found his way back to the Rams when Tex Schramm hired him to be the publicity director for the team. He did take a year off from the team to take on a job promoting the 1956 Olympics which were to be held in Melbourne, Australia. Upon his return he came back to the Rams organization and soon found himself as General Manager of the team. As GM he turned the Rams into a contender and also made them a profitable team for the first time since they had arrived in the Los Angeles area. 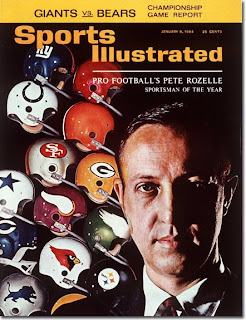 When Bert Bell passed away in October of 1959 the owners had a very important decision to make on who would lead them into the future. After casting 23 ballots they decided on  the 33 year old Pete Rozelle which was a surprise to many. A lot of people thought that the decision to go with Rozelle was becasue he was so young and that the owners would be able to manipulate and basically control him. He proved them wrong as he took control of the league but he also proved they made the right choice because the league would have unprecedented success in the years to come. When he took over as commissioner people around the league almost looked at the role as someone who helped keep the peace when there were disputes between owners, Rozelle had a much bigger picture on what the role should mean to the league. His goal was to bring prestige to the league that had just 12 teams and hardly could be found on a television unless they were in a major market. One of the first things he did was move the NFL offices from Philadelphia to New York which was home of all of the major networks. Rozelle negotiated a deal that brought the NFL to CBS in 1962 and had to jump major hurdles in the process like going before Congress to give the NFL an exemption from antitrust laws. The deal he made with CBS was to be equally shared throughout the league, the legendary Vince Lombardi once said what Pete did with television probably saved football in Green Bay.

Rozelle did have some rough times to deal with in the early days. One of them being an antitrust lawsuit brought against the NFL from their rival the AFL, although the lawsuit was eventually thrown out there was friction between the two leagues. He also had to suspend star players Paul Hornung and Alex Karras because of gambling allegations which brought him praise among the owners in the league. One of the hardest decisions Rozelle ever made in his tenure as commissioner was to give the go ahead to play football just two days after President John F. Kennedy was assassinated, it was a decision that bothered him for many years. He would later call it the most regrettable decisions he had ever made. 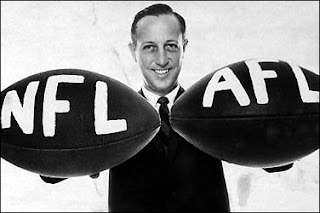 As the 60's rolled on the NFL/AFL rivalry heated up, players salaries were on the rise as both leagues got into bidding wars for football's biggest stars. After realizing the potential the inflation of salaries could have on both leagues Rozelle helped orchestrate a merger between the leagues. With the biggest hurdle being having the merger approved by Congress. Rozelle promised Congress that the teams would stay in their current cities which was one promise he couldn't keep. The merger was completed in 1966 with the first Super Bowl coming in January of 1967. Within a few years it was the most watched game in the United States, due in large part to the huge upset by the New York Jets in Super Bowl III. Rozelle was also instrumental in bringing Monday Night Football to the televisions of every household in North America in 1970. As the popularity of the league grew there would always be a hurdle in front of the commissioner to jump.

In 1974, the NFL suffered the first work stoppage because of labor disputes, while it was solved quickly, it was  a sign of things to come in that part of the game. The NFL had competition for the first time since the AFL with the World Football league starting up. They only lasted one year but drove the prices up in the ranks of professional football.  He also had to contend with owners wanting bigger and better stadiums with the cities they resided footing the bills. They threatened to move out of those cities if they refused. Rozelle fought hard to keep each and every franchise where they were but ran into Al Davis the owner of the Oakland Raiders. In a bitter court battle Davis sued the NFL for his right to move his team to Los Angeles  and won only to move the team back to Oakland  years later. Rozelle would have another league to contend with in the early 80's when the United States Football League formed, they were another short lived league that helped the prices rise for the cost of an NFL player. The 80's brought several challenges the USFL attempted to sue the league and were ultimately awarded $3.00 . There were drug scandals and a short strike in 1987 that Rozelle decided to bring in replacement players after one week, rather than have the league miss anymore games due to the work stoppage. The strike only lasted three weeks before the issues were resolved and the regular players were back. Rozelle would retire in 1991 after dedicating more than 30 years to the NFL.

Rozelle had his challenges and he faced them head on. He was a true innovator and one of the best promoters the world of sports has ever seen. What he did with the NFL is what we see today, every Sunday in households all across America, we are tuned in to see our favorite team play. If it wasn't for Pete Rozelle that NFL emblem might not be what it is today, he changed the game. When I tune into the Super Bowl I'll be sure and remember Pete Rozelle built the league into the juggernaut that it is, truly one of the greatest commissioners that the any league in United States has ever seen.