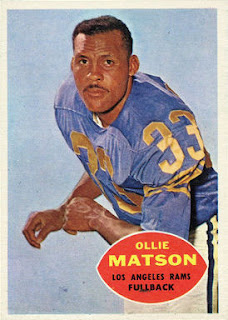 On February 28, 1959, the Los Angeles Rams sent 9 players to the Chicago Cardinals for running back Ollie Matson. It is regarded as one of the most lopsided trades in NFL history. Matson's career in Chicago began in 1952, he was a versatile player who not only played in the backfield, he also was a spectacular kick returner and played some defensive back as well. In his 6 years in Chicago, Matson averaged 4.4 yards per carry as he rushed for 3331 yards and scored 24 touchdowns out of the backfield. He was definitely more than just a running back as he caught the ball 130 times and scored 16 touchdowns as a receiver. He might have showed his greatest versatility as a kick returner, his numbers on punt returns were respectable it was the kick return numbers that were astounding. In 86 kickoff returns for the Cardinals he had averaged 28.5 yards per return and punched the ball in 6 times. His best year on the ground came in 1956 when he rushed for 924 yards, he was simply one of the best in the league. In all six years he wore the Cardinals uniform he was selected to the Pro Bowl. 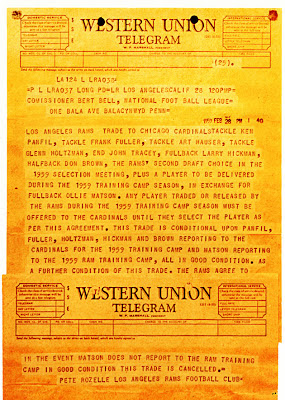 Despite Matson's accomplishments the Cardinals only posted a winning record in 1956. Pete Rozelle was the General Manager for the Rams and he put the deal together that would send offensive tackle Ken Panfil, defensive tackle Frank Fuller, defensive end Glen Holtzman, defensive tackle Art Hauser, defensive end John Tracey, running backs Don Brown and Larry Hickman as well as a second and fourth round pick. It was a monster deal that in the end didn't have the desired result for either team. Matson rushed for 863 yards his first year in L.A., then his production fell off drastically and the team around him could not help him win a game. He played 4 seasons total with the Rams, by the end of his tenure there many fans considered the trade to be the reason the club digressed. Ollie moved on from Los Angeles after the 1962 season then played for Detroit one season before spending his final 3 seasons in Philly. On the Cardinals side Frank Fuller and Ken Panfil both went to the Pro Bowl the first year they played in Chicago. Fuller would play the rest of his career with the Cardinals, he was by far the best player they received in the trade. Panfil suffered a career ending injury in the 1961 preseason. Art Hauser only appeared in two games with the Cards before being moved to the New York Giants. None of the other players panned out for the team and this trade had bust written all over it. I'm sure both teams would have rethought the whole deal if they only knew how it would all work out. It's one of those deals that both teams rolled the dice and neither one of them really came out on top.

Ollie Matson played for 14 years in the National Football League, when he retired in 1966 his 12,799 all purpose yards were second to only Jim Brown. He was inducted into the Pro Football Hall of Fame in 1972. While his days in Los Angeles didn't go the way many might have wished they would, he was a great player. The trade might have taught general managers a thing or two about going all in on one guy.
Posted by Wade Forrester at 10:33 AM