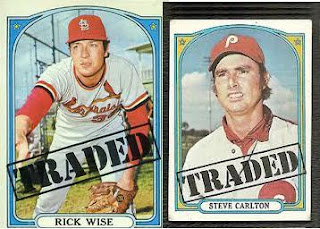 On February 25, 1972, the St. Louis Cardinals traded Steve Carlton to the Philadelphia Phillies for Rick Wise. It looked like an even swap at the time, Carlton was only 26 years old and Wise just a year older, they both showed they had what it took to pitch in the majors. The year before he was traded Wise had pitched a no hitter for the Cincinnati Reds and became the first player to hit two homers in a game that he threw a no no, that game made him a legend in Philly and a lot of fans were pissed when they acquired Carlton at his expense. They shouldn't have been. Carlton had a 77-62 record and was coming off a 20-9 season, his counterpart had 75-76 record up to that point, on paper the Phillies were getting the better player. It was still widely perceived that it was an even swap and that Carlton would not do well in Philly.

Anyone that doubted Carlton would do well in The City of Brotherly Love would be proved wrong. He won the Cy Young award with a  27-10 record in his first season in Philly, it was the last time a player won 25 games or more. The following season he digressed as he posted a 13-20 record, it was just a hiccup, Carlton posted a winning record for the team for the next nine years in a row. Those years included 3 more Cy Young awards and a World Series ring in 1980. 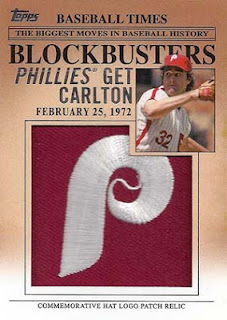 Meanwhile, Wise posted a 16-16 record in his first season in St. Louis then followed it up with a 16-12 record and an All Star appearance. Just two seasons after joining the Cardinals he was traded again, this time it was to the Boston Red Sox. He suffered an arm injury his first season in Boston then bounced back with a career high 19 wins in 1975. He followed it up with two solid seasons before being shipped to Cleveland. It was the second time Wise would be traded for a future Hall of Famer with Boston acquiring Dennis Eckersly in the deal. His time in Cleveland started off rough, he led the American League in losses with 19, he did bounce back in his second year with the club by posting a 15-10 record. In 1980 he joined the San Diego Padres as a free agent. After two mediocre years with the Padres he hung up the cleats for good in 1982. When I talk about Rick Wise, I hope I don't diminish him, he did something I've never done, hell he pitched in the majors and even tossed a no hitter. His record stands at 188-181, he pitched for 18 years which is something I could only dream of doing. Carlton on the other hand is 4th on the all time strikeout leaders list, posted a 329-244 record, represented Philadelphia 7 times in the All Star game and was a key cog on the 1980 World Series Championship.

The trade that brought Carlton to Philly was all about money. Carlton was offered $60,000 and wanted another $5,000 to make the deal. Gussie Bush, the owner of the Cardinals stood his ground and refused to sign him for that much money. In the end they chose to ship him to Philly for Wise, who was asking for the same amount of money from that club. In the end both players inked deals, Carlton signed a $60,000 deal with the Phillies and Wise signed a $57,500 deal with the Cardinals. It seems that Gussie Busch was simply standing his ground on a pay increase rather than looking at the true potential of this kid named Carlton. Steve was shocked by the trade, he even said he would have signed the deal with St. Louis if he knew they were going to move him because of the contract issues. Looking back it's easy to say the Cardinals should have held onto Carlton and gave him every penny he asked for but nobody could ever know the heights a player will reach before the player has a chance to scale the mountain. Carlton certainly reached the top of the mountain with his Hall of Fame induction in 1994 and will always be a legend in Philadelphia.