On February 20, 1997, Hakeem Olajuwon of the Houston Rockets became just the 15th player to surpass the 23,000 point mark in NBA history. He reached the milestone in a 107-97 win over the Toronto Raptors.  Olajuwon scored close to 4,000 more points before his Hall of Fame career ended in 2002. 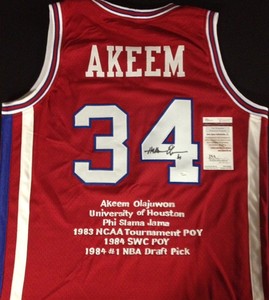 The Nigerian born player was one of six children who came from a hard working class family. Growing up he played goalie in soccer before he discovered basketball at the age of 15, he knew right away it was the sport for him. After high school Olajuwon was hardly recruited but still caught on with the University of Houston. When he first arrived there the coaches asked him to dunk, it was something he had never done before. The coaching staff set up a chair in an effort to demonstrate what they were asking for, so Hakeem went and stood on the chair. When the coaches told him not to use the chair they found out that even at 7 foot tall Olajuwon wasn't able to dunk the ball. It was something he would be sure to learn. With a lack of playing time as a redshirt freshman he asked his coaches how he could see more time on the floor, he was advised to workout with former NBA MVP and Houston resident Moses Malone. Olajuwon took the advice and played head to head games with Malone and several other NBA players. The result was great, he returned to the Cougars a different player. He and his teammates became known as the "Phi Slama Jama" the first slam dunking fraternity. His Houston team made back-to-back Final Four appearances in 1983 and 1984. In '83 Houston was knocked off by N.C. State in the Championship Game. They suffered the same fate the following year, this time it was Patrick Ewing and Georgetown that beat them in the final game of the tournament. He had come a long way from Nigeria and the best was yet to come. 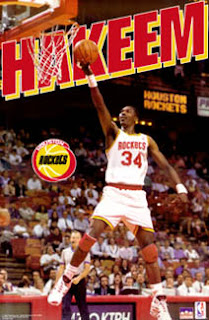 Olajuwon chose to leave school one year early so he could enter the NBA draft. After a coin flip between the Houston Rockets and Portland Trail Blazers went Houston's way, they made Olajuwon the #1 pick of the 1984 draft. It was where he wanted to play, him knowing they had the high pick was the main reason he left school early. Olajuwon was drafted before NBA legends Michael Jordan, Charles Barkley, and John Stockton. One year earlier the Rockets won the first pick after winning a coin flip over the Indian Pacers. They took 7' 4" Ralph Sampson with that pick, so two flips of a coin formed what would became known as the "Twin Towers" of the NBA. Olajuwon's impact was huge for the Rockets, he averaged 20.6 points with 11.9 rebounds in his rookie season. The team had gone a dismal 29-53 the year before he arrived, after he showed up the record improved to 48-34 and they went to the playoffs. The team was eliminated by the Utah Jazz that season but the fans in Houston were feeling good about the future.

His second year was better than his first as he led his team all the way to the 1986 NBA Finals. The Rockets fell to the Boston Celtics who had also beaten the Rockets in the 1981 NBA Finals. When Ralph Sampson suffered a knee injury the following season he was traded to the Golden State Warriors, the departure of his teammate only made Olajuwon better, he was now the true leader of his team. He led the Rockets in almost every category on the books and became a perennial all star. The list of accomplishments is long but they  did not come without a few bumps in the road. In the '90-'91 season he caught an elbow from the Bulls' Bill Cartwright that fractured bones around his eye, the end result was 25 missed games. In the '91-'92 season he missed 7 games due to an irregular heartbeat. Olajuwon came back from those setbacks and performed at the top level. Despite his performance, his Houston team had become mediocre at best. They hadn't won a playoff series from 1988 to 1992. With Olajuwon coming off a sub par year in 1991 there was speculation he might be traded, luckily for Houston it never materialized because Olajuwon would lead the team to back-back Championships just a few years later. 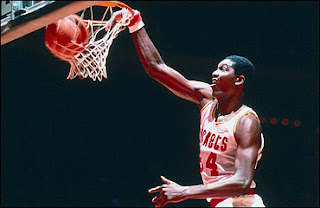 Following the '93-'94 season he was named League MVP, Defensive Player of the Year, as well as the Finals MVP, he is the only player in the history of the NBA to win all three awards after one season. The Rockets met the New York Knicks that season in the Finals, the Knicks featured Patrick Ewing who had helped Olajuwon fall short of winning the National Championship in college, this time he wouldn't be denied the hardware. It was a battle that went to 7 games, before Houston claimed their first NBA Title in franchise history. Olajuwon was a beast in the series, averaging 28.9 points per game and 11 rebounds per game. 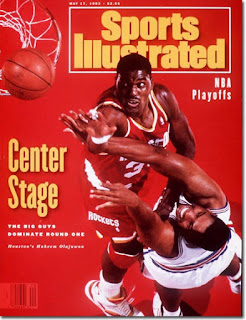 The following season a trade reunited Olajuwon with his college teammate and  frat brother from Phi Slama Jama, Clyde Drexler. It wasn't the smoothest of transitions but they gutted out a tough season and made the playoffs. Drexler came on like a beast in the playoffs and Olajuwon caught fire as well. They advanced through the playoffs beating the likes of David Robinson and the San Antonio Spurs before meeting the Orlando Magic and a kid named Shaquille O'Neal. This series was nowhere near as tough for Olajuwon and the Rockets as they swept the the Magic to become just the fifth team in league history to win back-to-back titles. Olajuwon took home the Finals MVP for the second year in a row. His numbers were ridiculous, he averaged 33 points per game with 10.3 rebounds a game throughout the playoffs.

His years in Houston ended after the '00-'01 season, the team never did reach the top of the mountain after the Championship in 1995. Olajuwon, by the time he left the team had scored 26,511 points. He signed with the Toronto Raptors for one year before retiring at the end of the '01-'02 season. He scored his last 435 points as a Raptor. Olajuwon gave everything he had to Houston and he owns 9 different franchise records because of it. He was elected into the Naismith Basketball Hall of Fame in 2008. The road to all his achievements is so much more astounding to me because, he traveled a very different road to get to them. Truly a remarkable career.
Posted by Wade Forrester at 4:59 AM