On February 13, 1964, Chicago Cubs second baseman Ken Hubbs lost his life when the plane he was piloting crashed in Provo, Utah, he was just 22 years old. Hubbs got his pilots license just two weeks prior to the crash, it was something he did to get over an extreme fear of flying. It turned out to be a very fateful decision for the player who had taken home rookie of the year honors in 1962.

Hubbs was a great athlete as a kid and he even got to play in the 1954 Little League World Series. In High School he excelled in football, basketball, and of course baseball. His coaches called him the best player they had seen in every sport he played. He was recruited by John Wooden to play basketball at UCLA and also received a scholarship offer to Notre Dame to play quarterback. Ultimately  he decided to play baseball and signed with the Chicago Cubs as a free agent in 1959. 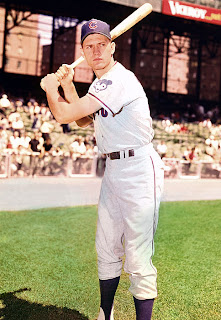 Hubbs received his first call to the show in September of 1961, it was just a cup of coffee as he played in only 10 games that season. After losing their starting second baseman Don Zimmer in the 1961 expansion draft it left second base open and Hubbs seized the opportunity. The kid could play defense and he had a cannon of an arm, going 78 games without an error in 418 chances, both broke major league records. He batted .260 with 5 home runs in his rookie season, led the team in triples and was second in doubles and runs scored. Hubbs had everyone in Chicago buzzing just knowing that he would get better. He not only took home the Rookie of the year award, he also won the Gold Glove. The defensive highlight of the season came when he started a triple play on September 30, 1962. The following season his averaged dipped to .235 but some said that he was even better defensively. The one knock on Hubbs was he struck out a lot and had a tendency to hit into the double play. I'm sure that the fans in Chicago thought he would get better with time, unfortunately for Hubbs it was time he wouldn't have. 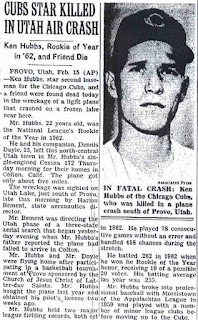 After participating in a charity basketball game in Provo, Utah Hubbs and his good friend Dennis Doyle decided to surprise family and friends by returning to Colton, California a day early. A snow storm moved into Provo the morning of February 13th that Hubbs thought he could beat. The plane made it almost 5 miles before the crash. The most likely culprit for the crash was poor visibility and the overall weather conditions were poor. It was a very sad day for all of baseball as the sport had lost one of  their brightest young stars. It was also a very sad day for all the families involved. Dennis Doyle and his wife and just had a baby one month earlier, his wife and baby had arrived in California just one day earlier so Hubbs and Doyle were anxious to get home and see their families. It was a very sad end to not one but two lives that had everything in front of them.

I wish this was a story that ended with a Hall of Fame induction, he seemed like he had all the ability to reach that point. I imagine it would be a much greater story. The story of how Hubbs died can also remind you of the life he lived, he made his mark in his short time on this earth. By all accounts he was not only a great ballplayer he was a great person. I guess a person can only wonder what might have been.
Posted by Wade Forrester at 3:21 AM