February 15, 1932: Eddie Eagan becomes the first athlete to win gold in both the Summer and Winter Olympics


On February 15, 1932, by taking home the Gold Medal as a member of the American bobsled team, Eddie Eagan became the first athlete and only American to ever win a gold medal in both the Winter and Summer Olympics, he had won the gold medal in boxing as a lightweight in 1920. 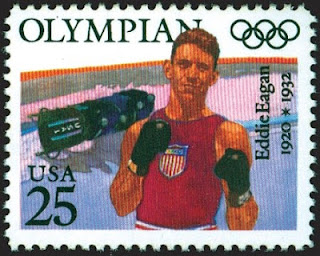 Eagan was born and raised in Denver, Colorado, his father was killed in a railroad accident in 1899, Eddie was only a year old. His mother taught German and French to support him and his four brothers. While Eddie was in high school he took up the sport of boxing and he excelled in the ring. He was very dedicated to boxing and he was also dedicated to advancing his education. After graduating he enrolled at the University of Denver where he won the amateur middleweight title. He only spent one year at the school before enlisting in the Army, the 20 year old would serve as an artillery lieutenant in France during World War I. When he returned home from war Eagan enrolled at Yale and became the captain of their boxing team. He had success at Yale, winning the heavyweight title for the AAU Championships in 1919. Eagan came very close to winning the light heavyweight title that year also but just fell short. He would go onto fight in the Inter-Allied games in Paris, France where he won the middleweight championship. It all led to him representing the United States in the 1920 Olympics, held in Antwerp, Belgium. He fought men from South Africa, Great Britain, and Norway on his way to winning gold for his country. 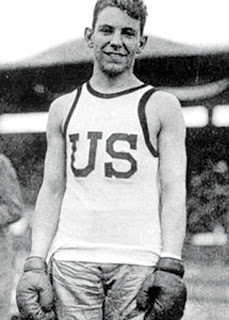 After taking home the gold he returned home and graduated from Yale in 1921, he then went onto Harvard to study law. He spent just one year at Harvard before being offered a Rhodes scholarship which is widely considered the most prestigious scholarship in the world, it gave Eagan an opportunity to study law at Oxford University. From 1922 to 1925 he not only studied at Oxford he also boxed. Eagan became the first American to win the British amateur boxing championship in 1923. He got another chance to compete in the Olympics in 1924 as a heavyweight but failed to bring home a medal.

When his days at Oxford came to an end Eddie traveled the world challenging any amateur boxer he came across, it was said that he didn't lose a fight. He returned to the states and in 1927, he helped train Gene Tunney who was set to fight Jack Dempsey in a rematch that would become known as the "Long Count Fight",  Tunney won the controversial match and Eagan played a large part in helping him be in the shape he needed to face a foe like Dempsey. 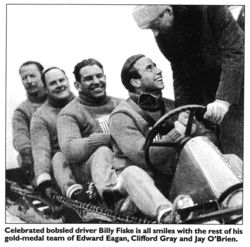 Following that fight Eagan started practicing law and it looked as if his glory days were well passed him. Then an old friend by the name of Jay O'Brien persuaded him to join the Olympic bobsled team. O'Brien was head of the U.S. Bobsled Olympic Committee and he was put in a bind when one of the members of the four man team decided to not compete in the event, O'Brien turned to his old friend who had never stepped a foot in a bobsled. The thing about Eagan was he could do anything he put his mind to. In college he was much more than just a boxer. He excelled in every sport he participated in which included tennis, fencing, swimming, and wrestling. He was very confident that he would be able to have success in the bobsled as well. His teammates on the bobsled team were an interesting group of men to say the least. The driver was a 20 year old kid by the name of Billy Fiske,  4 years before at just 16 years old he became the youngest athlete to win a gold medal, that record would stand until 1992. Eagan took the second spot on the sled, then there was Clifford "Tippy" Gray behind him. Gray was a 40 year old accomplished songwriter who was said to have written more than 3,000 songs. The brake man on the sled was Eagan's old friend Jay O'Brien, he was 49 years old when he jumped in the sled on that February day.

The 1932 Olympics were held in Lake Placid, New York, the city got slammed by a blizzard that forced many events including the bobsled to be delayed. Three days after they were originally scheduled to race Eagan and the boys jumped in the sled and made history. They smoked the competition in the first three heats then in the fourth the team came very close to catastrophe as one of the sleds runners almost went off track Fiske was able to correct it in the knick of time and the team finished two seconds faster than the silver medalists. It has been more than 80 years since that day in Lake Placid and not one man has done what Eagan did by winning that gold medal. 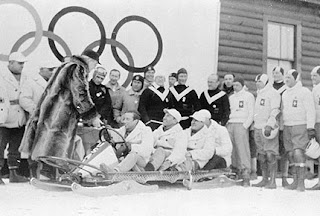 Eagan was the only member of the team to survive more than ten years following the historic run. His friend O'Brien passed away after having a heart attack in 1940. Fiske became the first American to join the British Royal Air Force, on August 16th of 1940 his plane was severely damaged in battle, Fiske was severely burned and passed away just two days later. Gray was entertaining troops in England when the town he was in was heavily bombed, it caused Gray to have a heart attack which led to his death in 1941. Eagan lived a long fulfilling life. After the '32 games he served as the assistant U.S. attorney for Southern New York. In 1941 with the United States entering World War II he joined the Army Air Corps, becoming the Chief of Special services in the air transport command. By the time the war ended Eagan held the rank of lieutenant colonel. Following the war Eagan remained part of the sports world, he had stints as head of the New York State Athletic Commission, then was appointed to lead Dwight D. Eisenhower's People to People sports committee, before taking on the Director of Sports Programming for the 1964 World Fair that was held in New York. Eagan passed away in 1967 at the age of 69, he was a remarkable man who led a remarkable life. While Eagan is the only American to win gold in both the Summer and Winter games he is joined by three other athletes, Jacob Tullin Thams of Norway, Christa Luding-Rothlinburger of Germany, and Clara Hughes from Canada are all in a very elite club with Eddie Eagan.
Posted by Wade Forrester at 12:16 PM