On February 6, 1968, on the thirteenth hole at Seven Lakes Country Club in Palm Springs, California former President Dwight D. Eisenhower dropped a hole in one. He hit the holy grail of golf on a par 3, 104 yard shot. An avid golfer, Eisenhower help popularize the sport. The great Arnold Palmer once said "One would be hard pressed to find any single person who did more to popularize the game of golf, not only in the united States but throughout the world, than President Eisenhower. His visibility, coupled with his passion for the game, were inspiration for literally millions of people picking up the game for the first time." Palmer went onto say "Those involved in golf today owe him great gratitude." What Palmer said was very true. When Eisenhower took office in 1953 it was estimated that 3.2 million people played the game of golf, by the time he left office in 1961 the number had nearly doubled. 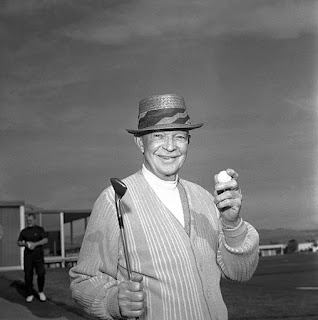 Eisenhower was said to have played more than 800 games of golf in the 8 years he was the Commander in Chief. He spent so much time at Augusta National that some called it the second White House. There are several fixtures at Augusta that will always remind people of the former President, after his election in 1952 a special cabin was built for him that even featured an area for the Secret Service. Eisenhower hit a pine tree off the 17th hole so much that he proposed that it be cut down, not wanting to offend the President the head of Augusta, Clifford Roberts quickly adjourned the meeting. The tree would become known as the "Eisenhower Tree" and it still stands today. There is also a pond that President Eisenhower stumbled upon and suggested that a damn be built so it could be a good place for fishing, it would become known as "Ike's Pond." The impact the President had on golf led him to be enshrined into the Golf Hall of Fame in 2009. His handicap ranged between 14 and 18 and he only shot under 80 a few times but what he did for the sport is undeniable which led to that great honor. Eisenhower wasn't the only President to score a hole in one in his lifetime, Richard Nixon and Gerald Ford also achieved the feat. Nixon once called it the thrill of his lifetime. I'm sure Eisenhower felt the same way the day he dropped it in from 104 yards out.
Posted by Wade Forrester at 11:57 AM