On February 17, 1980,  Buddy Baker won the Daytona 500. It was a monumental win for Baker as he had been seeking the victory at NASCAR's biggest event for 19 years. With an average speed of 177.602 Baker shattered the previous record for the event which was 161.550 set by A.J. Foyt in 1972. The car Baker drove was a gray Oldsmobile, his opponents nicknamed it "The Gray Ghost" they said it was so fast that it blended in with the asphalt as he passed them. 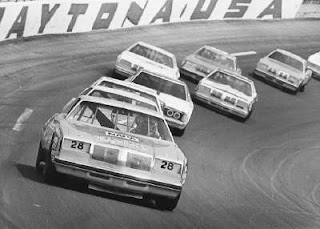 Baker knew his car had everything it would need to win the race, but he also knew that he had thought he could win it before, only to have his heart broken. In 1971 Baker was in contention until a late pit stop cost him, then in 1973 he was leading by half a lap when his engine blew with only six laps to go in the race. In 1978 he suffered the same fate this time he was leading with only 5 laps to go when his engine blew. In '79 he won the pole position then just 38 laps into the race he had an engine issue that ended his day early. Even with the history of Baker's failures at Daytona on his mind, he was more than optimistic before the 1980 race. 24 hours before the green flag was set to wave he told reporters "I'm flying. I'm running laps at 197 miles per hour. I'm going to win if nothing goes wrong." Everything went right for Buddy Baker that day. 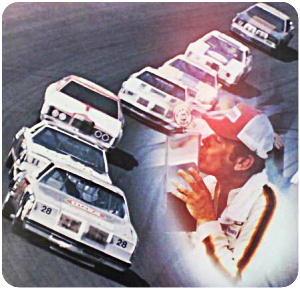 Baker won the pole position with a speed of 194.009 and each and every opponent knew he was the guy to beat. "The Gray Ghost" led 30 of the first  33 laps before Baker laid off a bit and watched a handful of drivers battle for the lead before moving back up from on lap 88 he held the lead until lap 180. With only 20 laps to go and the final pit stops upon them Baker and his team needed everything to go right to give him a chance to win this race. The gas man barely got his nozzle out of the tank before baker jumped on the throttle sending him and his teammate falling to the ground. The pit stop put Baker in a great position and by lap 182 he held a six second lead over the second place driver Neil Bonnett. Even with the lead and only a handful of laps to go baker knew fate could be cruel and definitely had some of the previous attempts running through his head. He just stepped on the gas and opened up a 13 second lead, his crew chief wanted him to slow down and conserve fuel but baker wouldn't listen. He was a man on a mission and this mission was going to be accomplished. With just three laps to go a wreck forced a caution which in turn guaranteed Baker would have enough fuel to finish the race. Baker cruised to victory lane. He was almost beside himself  as the mob of people emerged upon him in victory lane. It had been a long road to becoming the winner of NASCAR's most famous race.

Baker was a fierce competitor, he finished in the top 10 more than 300 times and won 19 races in his long career. The win at Daytona was the pinnacle for Baker, he said "Winning this race is something you will always be remembered for" and he was right. His average speed of 177.602 miles per hour had set a new mark for any 500 mile race, it still stands as the record at Daytona. It was one helluva day for Buddy Baker.

Watch the entire race here, if you advance to the 2 hour mark you can watch the last ten laps and Baker's post race interview:
http://www.youtube.com/watch?v=HVgW39STUFg
Posted by Wade Forrester at 4:12 AM