On February 22, 1980, by beating the mighty Soviet Union 4-3 the United States National Hockey Team pulled off one of the biggest upsets in the history of American sports. It would become known as "The Miracle on Ice" after Al Michaels made the famous call exclaiming "Do you believe in miracles!!?!!" it was a moment in sports history that has become legendary. 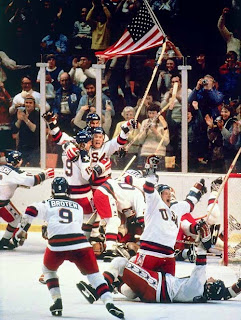 The scene was Lake Placid, New York. The Soviets were an unstoppable force who had won the previous four gold medals dating back to the 1964 games. Their team featured  Vladislav Tretiak who was regraded as the best goaltender in the world at the time, the team around him was a phenomenal bunch who dominated every team on the way to the medal round. The Americans were led by coach Herb Brooks, he put together a team full of college kids, nine of them had been coached by Brooks at the University of Minnesota. The only player who made the cut from the previous Olympic squad was Buzz Schneider. It was a fresh group of young men who were prepared by Brooks to stun the world.

Once the puck dropped at The Field House in Lake Placid, it didn't matter who was the favorite and who was not, they were two teams with the same goal and that goal was to win. It was evident early that both teams were hungry for the win. The Soviets struck first when Vladimir Krutov was able to deflect an Aleksi Kasatonov slapshot passed American goalie Jim Craig. Buzz Schneider was able to tie it back up before the Soviets took the lead right back with a goal from Sergei Markarov. With time winding down in the first period Dave Christian fired in a long slapshot, the Russian goalie misplayed the rebound and Mark Johnson came flying in and put it passed him. The period ended with the score all knotted up at 2.

The Soviets coach Viktor Tikhonov made what he would call the biggest mistake in his coaching career by pulling his star goaltender and replacing him with Vladimir Myshkin. The move surprised both teams. The Soviet team dominated the second period outshooting the Americans 12-2, only one of those 12 shots got passed the American goalie, the period ended with the Soviets leading 3-2. 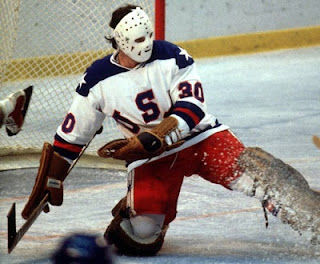 The Americans were desperate to get something going against the Soviet team. The prime opportunity to strike came when a miscue by the Soviets led to a powerplay for the U.S., the Americans attacked the net furiously, then late in the powerplay, Mark Johnson snuck one under Myshkin. With the score 3-3 the Americans had a new lease on life. A couple of shifts later the captain of the United States squad, Mike Eruzione put his team on top with just 10 minutes to play. The 8,500 on hand erupted as the Americans led for the first time in the contest. It was far from over, the Soviets attacked furiously and Jim Craig stood on his head as he deflected every shot they put on net. In a last ditch effort the Soviets pulled their goalie, they had never even practiced 6 on 5 hockey because their coach didn't believe in it. They threw everything they had at the Americans net, missing a number of shots wildly in desperation. With the time winding down the entire crowd started the countdown then Al Michaels made the famous call: "11 seconds, you've got 10 seconds, the countdown going right now. Morrow up to Silk. Five seconds left in the game. DO YOU BELIEVE IN MIRACLES!!??!! YES!!!" Perhaps the highlight of Al Michaels career came right there in that moment. 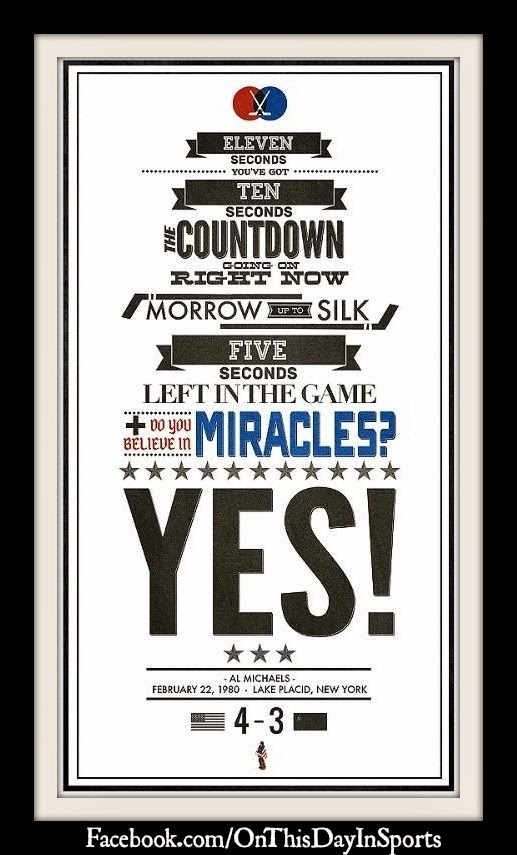 The Americans had to play one more game before claiming the gold medal. It was a hard fought battle with Finland that they prevailed by the score of 4-2. The team showed their resilience in that game as well, as they came back from a 2-1 third period deficit to win the gold medal.

Since that day in Lake Placid that American team has become truly legendary. A handful of them went onto have successful professional careers and all of them will forever be held in the highest regard in the history of American sports.

The last minute of the game with the famous call http://www.youtube.com/watch?v=8gfD134ED54
Posted by Wade Forrester at 3:38 AM