On February 5, 1972, Bob Douglas became the first African American elected into the Naismith Basketball Hall of Fame. Known as "The Father of Black Professional Basketball", Douglas organized two amateur teams in Harlem called the Spartan Braves and the Spartan Hornets. The Braves and Hornets played other teams in the New York City area form 1919 to 1923. After losing players to professional leagues Douglas decided to start a team of his own, by doing so Douglas became the first African American to own a Professional Basketball team. With Douglas looking for a place for his new team to play he made a deal with the owner of the Renaissance Casino in Harlem. Set to play at their ballroom that had opened just one year earlier, in turn Douglas would call his team the New York Renaissance. Nicknamed "The Rens" they were not only the first African American owned team, they were the first all-black professional team. Douglas was more than an just the owner, as he was also the head coach. 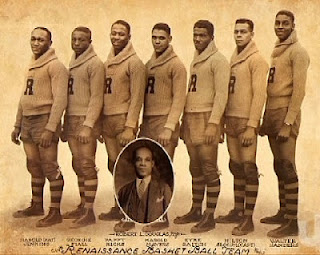 The team played in a time that they were not accepted socially or professionally, it wouldn't keep them from becoming one of the great stories in the history of basketball. They played hectic schedules often playing more than 120 games a season,  former player Jim Usry said they played every day and twice on Sunday. The Rens would play any team that would play them, including the Original Celtics, an all white team from New York they were one of the premier teams of the era. The games between the Celtics and the Rens drew great crowds with more than 15,000 people showing up to watch them play. The games between the two teams were well played on the court but caused race riots off the court. The players knew that it caused issues within the community but both sides also knew that what they were doing was something very important in helping advance their sport. The Celtics showed that they truly supported the Rens in 1925 when they refused to join the ABL, after the Rens were not invited to the league. With the ABL having to suspend operations in 1931 due to the Great Depression, the Rens had their greatest success. In the 1932-'33 season they put together 88 consecutive wins on the way to a 112-8 record. They won many Championship titles through the years which included some great showdowns with the Celtics for the title. 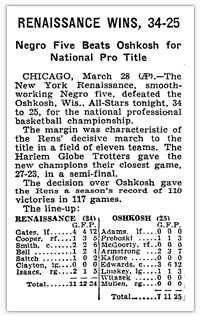 The facts aren't real easy come by when it comes to the Rens, which makes it a little difficult to give you the years that they won their Championships. The only Championship Douglas is credited with came in 1939, the Rens beat the Oshkosh All Stars taking home the title. The Oshkosh All Stars were the champs from the National Basketball League an all-white league, so the Rens beating them was a monumental occasion. They were a dominant bunch from the day they were formed until they day the team came to an end. In 1946, Joe Lapnick a former player for the Celtics and the current coach of the New York Knicks tried to persuade the Basketball Association of America to allow the Rens to join their league only to be denied. Lapchick looked well beyond the color of a mans skin as he is credited with signing the first African American player in the history of the New York Knicks. By 1949, the BAA merged with the NBL and became the NBA, it led to the end of the New York Renaissance. The team had dominated the sport of basketball for more than 25 years posting an unbelievable record of 2,588-539 record.

Some of the greatest men from the history of sports were the men who dealt with racial inequality and had great success. What they faced is unimaginable today, like not being allowed to stay at hotels or eat at a restaurant simply because of skin color. By remembering men like Bob Douglas it does make it so, what they lived through meant something and it will not be forgotten. His team the New York Renaissance is recognized collectively in the Naismith Hall of Fame as well as two of the players from the team, Charles "Tarzan" Cooper and William "Pop" Gates were both enshrined. Before today I didn't know much about the man nicknamed "The Father of Black Professional  Basketball" after running across the fact I am glad to have learned about his life, he really was a pioneer that should be celebrated more.
Posted by Wade Forrester at 3:36 AM