On February 19, 1977, Rod Gilbert became the first player to score 1,000 points as a member of the New York Rangers. He reached this milestone in a 5-2 loss to the New York Islanders. Gilbert spent his entire 15 year career with the Rangers and is the only player to reach the 1,000 point plateau wearing only a Rangers uniform. 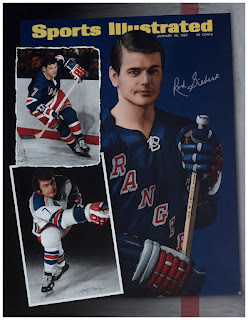 The road to a 1,000 points was far from easy. Before he even got his start in the NHL, Gilbert broke his back. It was the last game of the '59-60 season for his junior team, a fan threw some debris on the ice which caused Gilbert to slip and fall. Gilbert showed true resilience by working his way back from the injury and got his first taste of the NHL in the 1960 season, it was just a one game call up but he did grab an assist in that one game. That assist marked the 1st of 1,021 career points. The following season he was called up during the regular season, once again it was only one game in the pros, but he did get a chance to play in the 1962 playoffs. He played in 4 games against the Toronto maple Leafs scoring 5 points in those games. The 20 year old kid looked like he had all the ability to make it in the pros.

Gilbert became a full time player on the team at the start of the '62-'63 campaign. He scored 11 goals with 20 assists in his rookie year. His second year in the league he scored 24 goals then followed that season up with a 25 goal performance. Gilbert scored 20 goals or more in 12 of his 15 seasons in the NHL. Everything was looking good for the young player when the back issue came back to haunt him. He tried to play the '65-'66 season wearing a special back brace, it hampered his breathing which in turn caused him to have less stamina, surgery was his only option. Once again Gilbert showed resilience, he bounced back by scoring 28 goals in the '67-68 season and led the Rangers to the playoffs for the first time in 5 years. 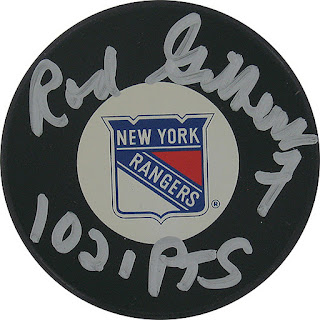 In the '70-'71 season Gilbert was teamed up with Vic Radfield and Jean Ratelle, they formed a line that would became known as the GAG line (goal-a-game) as they averaged at least one goal per game while they played together. The first season the trio was together they led the Rangers to a franchise record 107 point season. the following season Gilbert scored a career high 43 goals, Ratelle and Hadfield also reached the 40 goal mark that season making them the first line to have all three offensive players to reach the mark. The Rangers reached the Stanley Cup Finals that season but fell just short to the Boston Bruins. It was the closest Gilbert came to winning the top prize in all of hockey. Gilbert's production was at a high level through the end of the '76-'77 season, you can just look at his numbers and let them tell their own story. http://www.hockey-reference.com/players/g/gilbero01.html He only played in 19 games early in the '77-'78 season before he hung up his skates for good. Gilbert had accomplished a number of milestones in a Rangers uniform and the team retired his #7 because of it. He was not only the first Rangers player to score 1,000 points, he was the first player to have his number retired by the team. When it was all said and done Gilbert had scored 406 goals and recorded 615 assists. He received the highest honor in hockey by being inducted into the Hockey Hall of Fame in 1982.

The first piece of art was done by Adam Port you can check out more of his great work here:
http://adamport.com/