On March 1, 1996, with a 74-68 win over the Cleveland Cavaliers, Atlanta Hawks head coach Lenny Wilkens recorded his 1,000th career victory as a coach. Wilkens was the first head coach to reach this milestone. He recorded 332 more victories before he retired from coaching in 2005. 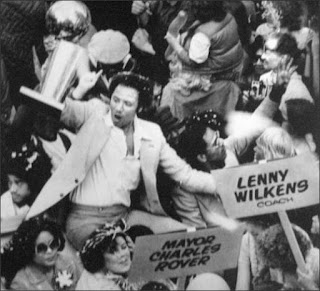 Before he was a coach he was a player and he was a damn good player. Drafted sixth overall by the St. Louis Hawks in 1960, he joined a great team that reached the NBA Finals in his rookie season, where they were beaten by the Boston Celtics. The next season the Hawks sort of fell off the map, injuries really hurt the team and Wilkens was only able to play in 20 games becasue of being called into service by the U.S. Army. He was stationed at Fort Lee in Virginia, during the week he played basketball on the base while playing with the Hawks on the weekends. When he returned full time NBA duty his team improved and he was a key contributor in that improvement. From 1963 to 1968 the Hawks had become a perennial playoff team, and Wilkens was selected to the All Star Game 6 of the 8 years he spent in St. Louis.  After averaging 20 points and 8.3 rebounds per game in the '67-'68 season, Wilkens finished second in the MVP voting behind the great Wilt Chamberlain. Following that season he was traded to the Seattle SuperSonics. It was just the second year in the league for the Sonics and he helped the team improve greatly as he averaged 22.4 points per game in his first year with in Seattle.

Before the '69-'70 season Seattle's general manager Dick Vertleib asked Wilkens to become a player/coach, Lenny almost turned down the idea then decided he had nothing to lose. He continued to shine on the court while learning the ropes as a coach. By his third year as a coach the team recorded a 47-35 record and went over the .500 mark for the first time in franchise history. He remained a consistent force on the court leading the league in assists during the '69-70 and '71-'72 seasons, but the coaching took a toll and he relinquished that role to Tom Nissalke. The new coach decided that Wilkens didn't fit with what he wanted to do in Seattle so he traded him to the Cleveland Cavaliers, the move infuriated fans. Even though he didn't reach the playoffs in his time as a player in Seattle he was  model of consistency and went to the All Star game 3 out of his 4 years with the team. The Sonics record plummeted and Nissalke was gone after just one season. 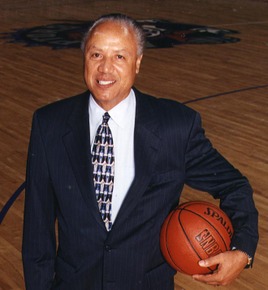 He spent two season with the Cavs and represented them in the All Star game in 1973. In 1974 the Portland Trail Blazers purchased his contract from the Cleveland. Wilkens took on the dual role of player/coach in Portland for one more season before his playing days ended and all his focus went toward the coaching aspect of the game. He averaged 16.5 points per game with 17,772 points and 7,211 assists. He ranks among the leaders in assists, games played, free throws made, and minutes played. Wilkens spent one season as the head coach in Portland before they hired Jack Ramsay, who would go onto become the best coach in the history of that franchise. One door closed another one opened, in 1977 Wilkens returned to Seattle as director of player personnel, just 22 games into the '77-'78 season  the Sonics were struggling and Wilkens took over as head coach. With Wilkens at the helm the team completed a remarkable turnaround that ended with the Seattle losing to the Washington Bullets in the NBA Finals. The following season they met the Bullets in The Finals again, this time they beat Washington giving that franchise their first and only title. He was the head coach in Seattle through 1985, the team made the playoffs in six of the eight years he led the team. He spent one year in the front office for the SuperSonics before taking a job as the head coach of the Cleveland Cavaliers. He had a great group of young men in Cleveland and he helped turn them into a true force in the NBA. In 7 seasons as the head coach in Cleveland the team won 50 games or more 3 times and reached the conference finals in 1992. They could never get passed Michael Jordan and the Bulls to reach the NBA Finals. The following season the Cavs won 54 games and then they were knocked out of the playoffs by the Bulls for the fourth time in six years, it was the end of the Wilkens era in Cleveland as the coach resigned following the '92-'93 season. It wouldn't be long before he was coaching again. 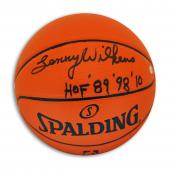 When he was hired on with the Atlanta Hawks in 1993 he was just 69 wins behind Red Auerbach for the most wins by a head coach in NBA history. During his second season with Atlanta he surpassed Auerbach and became the all time wins leader. Just one year later he became the first coach to win a 1,000. He coached 7 seasons  in Atlanta, in three of those seasons his team won 50 games or more. In his last two years with the team they fell under .500 and Wilkens moved on at the end of the '99-'00 season. His next stop was with the Toronto Raptors, he spent three years as the head coach in Toronto, posting respectable records in the first two before the wheels fell off the bus and his time in Toronto ended. The last stop in the great career of Lenny Wilkens came with the New York Knicks, he barely spent a year in New York before putting in his resignation. It might not have been a storybook ending but it was a great career nonetheless. Only Don Nelson has surpassed Wilkens as the all time wins leader as a coach in NBA history, Nelson won 1,335 games while Wilkens sits just 3 games behind the mark.  Wilkens was inducted into the Naismith Basketball Hall of Fame in 1989 as a player then again in 1998 as a coach and in 2010 he was inducted a third time for his work with the U.S. Men's basketball team. No matter how many coaches reach a 1,000 wins in their careers Lenny Wilkens will always be the first to reach that plateau, anyone that joins it will be in some pretty exclusive company, Jerry Sloan, Pat Riley, Phil Jackson, Larry Brown, and George Karl are the only coaches to reach the mark.

Here is a look at Lenny's remarkable numbers as a player: http://www.basketball-reference.com/players/w/wilkele01.html

And here are his coaching stats: http://www.basketball-reference.com/coaches/wilkele01c.html
Posted by Wade Forrester at 4:26 AM