On February 24, 1982, Wayne Gretzky scored his 77th goal of the season, it was a historic moment as he surpassed Phil Esposito's record of 76 goals set in the '70-'71 season. The goal not only was a milestone for the young Gretzky, it also gave his team a 4-3 lead over the Buffalo Sabres. He scored two more before the game was over giving him a hat trick on the historic night and a 6-3 win for his Edmonton team. Gretzky hit the milestone in the 64th game of the season then put on a show, on the way to scoring a record setting 92 goals on the year. The record still stands today. 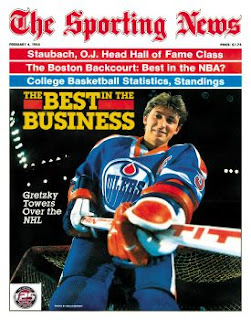 The historic 77th goal came 13 minutes and 24 seconds into the third period. Gretzky had put 7 shots on goal before his eighth shot went under the pads of Don Edwards, and history had been made. Despite them seeing their team go down by a goal the crowd in Buffalo gave Gretzky a standing ovation, as he was mobbed by his teammates. "The first thing that came into my head" Gretzky said "was that it put us up 4-3.' He went onto say Then there was relief  and a a sense of satisfaction, it took a lot of pressure off me." The show was far from over for Gretzky, he scored again late in the game, then put it passed Edwards one more time to complete the hat trick. Edwards had been a tough nut to crack up until that night in Buffalo. He had only let one goal get by him in the nine prior games against the young phenom. On that night, Edwards skated the length of the ice to say congratulations to the kid who just lit him up. It was true sportsmanship.

Wayne Gretzky was a phenomenal player who earned the nickname "The Great One". His list of accomplishments is long. When he retired in 1999, he held or shared 61 NHL records. To this day many of those records still stand tall. Some of the records might never be broken, but we can't forget a lot of people thought no one would ever surpass Esposito. You never know when the next kid will come along and make history.