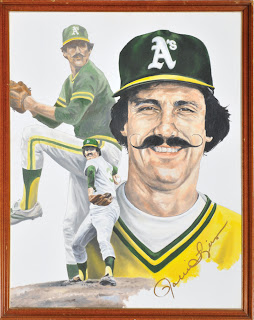 On February 21, 1986, Rollie Fingers announced he would be retiring from baseball. He had inked a deal to play for Pete Rose and the Cincinnati Reds following the his release from the Milwaukee Brewers after the 1985 season. His decision to retire came about after Reds owner Marge Schott would not bend on a clean cut policy for the team, she insisted Fingers shave off the most famous mustache in the history of baseball. When the General Manager of the team Bill Bergesch spoke to Fingers about the issue he was told "Well, you tell Marge to shave her St. Bernard, and I'll shave my mustache", neither side gave in and his 18 year career in the big leagues came to an end.

In high school Fingers was very successful, he pitched and played the outfield. After graduating in 1964 he was highly sought after by a number of major league teams. Ultimately his decision came down to the Kansas City Athletics and the Los Angeles Dodgers. He decided to sign with the A's because he had much more of a shot to make their roster, the Dodgers rotation was stacked at the time. The A's originally wanted him to play the outfield but quickly changed their minds after realizing his pitching potential. As a starter Fingers moved through the minor league ranks of the A's system before getting his call to the show in 1968. The team had moved to California just one year earlier. As a starter Fingers had mixed results, it wasn't until the 1971 season that he took on the closer role. This was before the days of the modern pitcher and Fingers was a pioneer in this position. He excelled as he made 17 of 19 saves that season. The A's went all the way to the ALCS that year, it was their first postseason appearance since 1931 when the team was in Philadelphia. Starting in 1972 the A's won three straight World Series, their roster was stacked. It included Reggie Jackson, Vida Blue, Bert Campaneris, Blue Moon Odom, Sal Bando, Joe Rudi and  of course one of the best closers of all time in Rollie Fingers.

The famous mustache came about when Reggie Jackson showed up to spring training in 1972 with a beard, Fingers and many other players started to grow their own facial hair figuring it would lead Jackson to shave off the beard. It had the reverse effect. The A's were owned by the ultimate showman Charlie Finley, instead of making his players shave he decided to start a contest to see who could grow the best facial hair by Opening Day. Fingers won the contest and $300 for his handlebar mustache. Finley saw the opportunity to turn it into a promotion and started "mustache day" at the ballpark, anyone with a mustache got in free. It's too bad that many years later Marge Schott didn't use his famous mustache to promote her team rather than write him off over something so stupid. 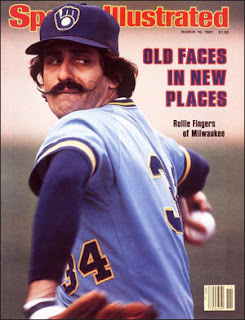 His days in Oakland ended when he hit free agency following the 1976 season. A number of teams put in a bid for his services, the San Diego Padre put in the winning bid and he pitched there for the next four years. In those four years he went 34-40 with 108 saves. While the team around him was mediocre Fingers was the best closer in the game, he won the unofficial National League Fireman of the Year Award in 1977, 1978, and 1980. After the 1980 season the Padres traded him to the St. Louis Cardinals, just four days after the trade the Cards moved him to Milwaukee. In Milwaukee he stabilized the closer position which was something the team was struggling with before he arrived. The Brewers had an explosive offense with Robin Yount and Paul Molitor leading the way, Finger was a final piece to a puzzle that would lead the franchise to their first postseason appearance in the history of the organization. In the strike shortened year of 1981, Fingers was lights out as he saved 28 of the 62 wins for the club on the way to winning the American league East title. They fell short that season by losing to the Yankees in the divisional playoffs, however Fingers was named League MVP and he took home the Cy Young award for his dominant performance. In the '82 season Fingers had 29 saves when he hit the disabled list with a torn muscle in his forearm, it was a season ending injury. A young rookie named Pete Ladd took on the closer role the rest of the way, the Brewers advanced all the way to the World Series where they met the St. Louis Cardinals, they lost the series in 7 games. The only thing Fingers could do was sit there and watch. The following season he was not able to bounce back, as tendonitis caused him to miss the entire 1983 season. His last solid year came in 1984, he made 23 saves for the Brew Crew but the team posted a more than disappointing 67-94 record and they finished last in the AL East. His one last run with the Brewers came in 1984, at that point Father Time was at his doorstep. He made 17 saves, he also recorded 8 blown saves before the season was done. His time in Milwaukee was over, then with the ridiculous demand by Schott for him to shave the following season brought his career to an end altogether. He had recorded 341 saves and was the all time saves leader at the time of his retirement, the record stood until 1992 when he was surpassed by Jeff Reardon. Seven years after retiring, Fingers was inducted into Baseball Hall of Fame.
Posted by Wade Forrester at 1:30 PM