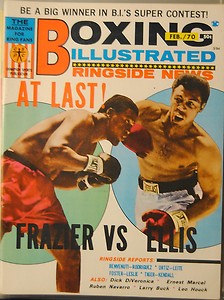 On February 16, 1970, Joe Frazier fought Jimmy Ellis for heavyweight title. The road to this fight came about after Muhammad Ali was stripped of his title following his refusal to be drafted in 1968. With the boxing world looking to crown a new champion Frazier took on Buster Mathis to win a New York version of the title, from there he steamrolled through Manuel Ramos, Oscar Bonavena, Dave Zyglewicz, and Jerry Quarry. Ellis won a different version of the title by beating Leotis Martin, Oscar Bonavena, and Jerry Quarry in an elimination tournament. Ellis would successfully defend that tile one time against Floyd Patterson. With both boxers claiming to be the champ there was only one way to decide who should own the title and on December 29, 1969 a contract was signed that put the wheels in motion for the February matchup.

Frazier was a 6-1 favorite due in large part to Ellis not fighting for over 17 months. Ellis believed it was being overplayed because he had been training for a fight that fell through. He insited that all he needed to do was drop a few pounds and he would be good to go. Elllis also had legendary cornerman Angelo Dundee on his side who gave him a vote of confidence by saying "Jimmy is like a bomb ready to go off. I've got to cool him off a little." Dundee was quick to point out more than one fight that fell through also and he believed his boxer would have no problem fighting Joe Frazier. When Ellis was asked about the odds he said "Odds mean nothing to me. I was an underdog against Leotis Martin, Oscar Bonavena, and Jerry Quarry."  He was about to find out Joe Frazier was a much more formidable opponent than any of those men that came before him.
Joe was in absolute great shape as he trained twice a day to trim down for the fight. His intense workouts included everything from the speed bag, to sparring partners were included. By comparison Ellis had light workouts, mainly skipping rope and shadow boxing, he was very much unprepared to take on Frazier. 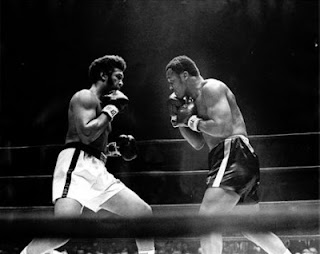 More than 18,000 people packed Madison Square Garden to see who would be the Undisputed Heavyweight Champion of the World. In the first round Ellis looked good as he executed his strategy to keep the fight in the middle of the ring, until Frazier landed a series of punches on his way to winning the first round. Frazier later said "Maybe he did take the first round, but that didn't mean nothing. I had command all the way." In the second round Frazier was able to take control, he tied Ellis up which took away his jab. Frazier then took him out of his game by getting him against the ropes and landing two crushing left hooks, the momentum had shifted. It was all Frazier from there on out, in the third he landed a huge left hook that had the whole crowd buzzing, Ellis was clearly rattled but survived the round. As Frazier walked to his corner following the third round, he had a smile form ear to ear on his face because he knew that Ellis was no match for him. 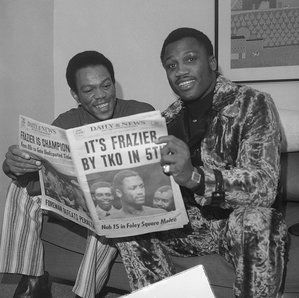 Joe Frazier came out in fourth looking like a ball of fire as he landed blow after blow. Once again Frazier put Ellis on the ropes and landed two massive left hooks that sent him crashing down, Ellis got to his feet only to have another left hook send him to the ground again, after the bell rang Ellis was able to get to his feet and head to his corner. The fourth round was done and so was Ellis, his trainer Angelo Dundee refused to let the boxer go out for any more punishment. Smokin Joe Frazier was declared the Undisputed Heavyweight Champion of the World by way of knockout.

This was a quite the display by Joe Frazier and he was declared the champ, many considered Ali to be the real champion. There is no way around it that with Ali's title being taken from him rather than him losing it to an opponent left a cloud over the title. What was going on with Ali was out of Frazier's hands and when Ali returned to the ring, he took him on in what was called the "Fight of the Century" Frazier beat Ali by unanimous decision and any talk of him not being the real champion was put to bed. He did lose his title to George Foreman in 1973 but went onto have several more memorable fights including some of the greatest fights of all time against Ali.

Watch the full fight here:
http://www.youtube.com/watch?v=zs62TpJvnws
Posted by Wade Forrester at 4:17 AM