On February 7, 1976, in an 11-4 win over the Boston Bruins at Maple Leafs Garden in Toronto, Darryl Sittler scored 10 points, it was the greatest individual performance in the history of the NHL. Sittler's 10 points broke a record that had been set in 1944 by the legendary Rocket Richard, then tied in 1954 by Bert Olmstead, both of those players recorded 8 point nights. It took 6 goals and 4 assists to reach the monumental feat, Sittler simply couldn't be stopped that night in Toronto. 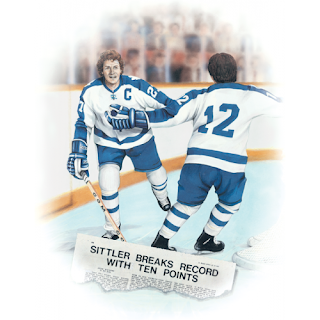 In the first period the Maple Leafs jumped on top early with goals by Lanny McDonald and Ian Turnbull, both goals were assisted by Sittler. Before the period ended the Bruins cut the lead in half when Jean Ratelle scored. The second period was when the Darryl Sittler show went crazy. Less than three minutes in Sittler put his first goal on the score sheet. Then a little over thirty seconds later he recorded another assist when Borjie Salming lit the lamp. Boston fought back, Bobby Schmautz was able to get one passed the Maple Leafs goalie. The score was 4-2 Maple Leafs, Sittler quickly took the momentum right back as he scored back to back goals and put his team up 6-2, as he recorded a hat trick. Boston answered back with a goal by Johnny Bucyk only to have Toronto score two more goals, one from Norm Ferguson then another by Borjie Salming. Sittler recorded his fourth assist of the night on Salming's second goal of the game. Boston's Jean Ratelle scored late in the second, it would be all the Bruins could muster. By the end of the second period the score was 8-4 and it would be all Sittler from there on out.  During the second intermission Sittler was told he only needed one point to tie the record for points in a game, so he simply came out and scored three goals. Why tie a record when you can just break it, right? 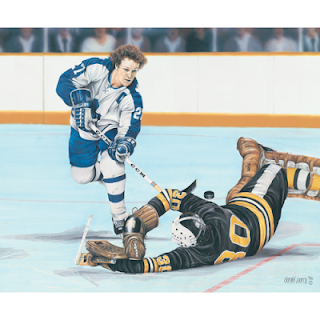 It was an astounding night for Sittler that will never be forgotten. The one person who probably wishes he could forget it was the netminder for the Bruins, Dave Reece. The rookie goaltender only played in thirteen games before that night, his fourteenth game would prove to be his last game in the NHL. Reece played the entire game with Sittler assaulting the net he was trying to protect. Sittler's career was much more than this one night as it ended with him being enshrined into the Hockey Hall of Fame. With that said, the 10 point performance was the highlight of his great career and it's hard to say that anyone will come close to matching the performance, much less surpassing it. There are 13 men including Sittler in the 8 point night or more club, Sittler is the only one in the "or more" category. Mario Lemieux scored 8 points in a game three times and "The Great One" Wayne Gretzky did it twice, the most recent person to accomplish the feat was Sam Gagner from the Edmonton Oilers, who reached the plateau in February of 2012. When you think of all the great players in the history of the game, then you realize only 13 men are in that club, it makes it a pretty exclusive club, Sittler is the king of the club. There are records in all sports that are likely to never be broken, Darryl Sittler owns one of them.

Footage from the 10 point night:
http://www.youtube.com/watch?v=0GqeFP7ubPs

The artwork is from https://www.heritagehockey.com/index.php/
Posted by Wade Forrester at 3:20 AM