On February 14, 1951, Sugar Ray Robinson took on Jake Lamotta for the World Middleweight Title, the fight would become known as the "St. Valentines Day Massacre". It was the sixth and final time the boxers met in the ring. Robinson's record stood at 123-1 with the one loss being handed to him by Lamotta eight years before the Valentines day matchup. On paper it would look as if Robinson dominated Lamotta as he had won 4 out of 5 fights before their final bout, Robinson might have held the edge on wins but every single time they met an epic battle took place. This fight would be no different as it went 13 rounds before a winner was decided. 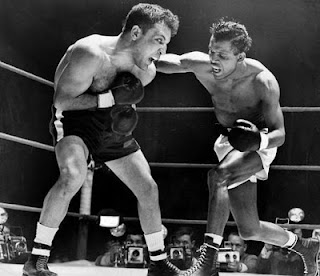 In the first 7 rounds the boxers went back and forth, Robinson took an early edge before Lamotta came back with a vengeance to even things up. In the 8th round Robinson took control and pummeled Lamotta through the 10th round. In the 11th Lamotta tried desperately to get back into the fight by cornering  Robinson and unloading a barrage of punches that his opponent was able to withstand, it would prove to be all Lamotta had in him. He came out in the 12th physically drained and the battle was showing as he had a cut above his right eye. Robinson beat Lamotta so violently in the 12th that the match could have easily been stopped, Lamotta just wouldn't quit. In the 13th Robinson continued the violent assault on the beaten and bloody Lamotta until 2 minutes and 4 seconds into the round the referee finally stopped the fight, Lamotta was on the ropes still refusing to go down.

Lamotta was known as "The Bronx Bull" and he was as tough as a bull. He might have lost the fight but the guy wouldn't give up. He never did hit the canvas. The fight marked an end to a series of  great battles. Both fighters were among the greatest of their time and they will always be remembered for it.

Posted by Wade Forrester at 9:30 AM