On February 12, 1988, the Hartford Whalers released Dave "Tiger" Williams, it marked the end of a 14 year career as Willaims retired following his release. He left the NHL as the all time leader in penalty minutes with 3,966 in the regular season and another 455 in the playoffs, bringing his total to 4,421. He was more than just a tough guy, he could also light the lamp and scored 15 goals or more in 11 of his 14 seasons on the ice. Tiger would often ride his stick like a horse after he scored a goal which was just another way to get under his opponents skin. It was his specialty. 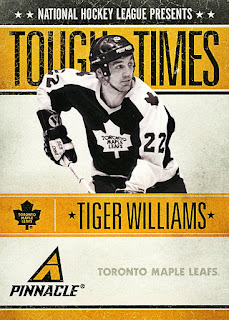 He got his start in the NHL after being drafted by the Toronto Maple Leafs in the 1974 draft, he first hit the ice for the team in January of 1975. Williams was the enforcer for the team protecting stars like Darryl Sittler and Lanny McDonald which led to a lot of time in the penalty box. He didn't only take a penalty he also put the biscuit in the basket averaging 15 goals per season over 5 years in Toronto. His time in Toronto ended because the team's owner Harold Ballard had an ongoing feud with Darryl Sittler. Ballard chose to trade the players that Sittler was closest to rather than just move Sittler to another team. The owner not only traded the players, he traded them to cellar dwellers in a form of spite. In February of 1980, Williams got the call saying that he had been traded to the Vancouver Canucks a team that was struggling to say the least. Williams didn't turn them into an instant contender but he added an element to the team that made other teams know they better come to play when they had to skate against Vancouver.

Williams had his best offensive year with the Canucks in the '80-'81 season as he scored 35 goals on a very mediocre team. That season he spent 343 minutes in the box as he continued the gritty play that made him a true Tiger. That season Williams was selected to the All Star game for the first and only time in his career. He would be best remembered by Canucks fans for his contributions during a Stanley Cup run in 1982. The Canucks matched up against the New York Islanders for the top prize in the NHL only to be swept out . Williams scored 3 goals and 7 assists in the playoffs and served 116 penalty minutes before his team lost in the Finals. He played for two more seasons in Vancouver before being traded to the Detroit Red Wings in August of 1984. Williams said the trade to Detroit almost made him cry as he had became a part of the city of Vancouver. He resides there to this day. 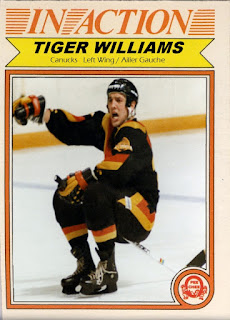 His time in Detroit was short lived, he only played in 55 games with the Red Wings scoring just 11 total points before he was traded again to the L.A. Kings in March of 1985. Williams had a couple of good seasons with the Kings as he scored 20 goals in '85-86 then 20 goals in the '86-'87 season, and at the same time he was wracking up the penalty minutes like it was nobody's business. In the '86-'87 season Williams recorded a career high 358 minutes in the sin bin. After a little more than two seasons with the Kings he was traded one last time to the Hartford Whalers in 1985, it would prove to be the final stop in his long career. He only played in 26 games with Hartford, scoring 6 goals and recording the last 87 penalty minutes of his career with the Whalers. Tiger Williams was a player that might not stand on top of the goals and points categories but he did do his job and he did his job well.

The celebration he made famous: http://www.youtube.com/watch?v=FpYQkuEurfI
Posted by Wade Forrester at 4:50 AM