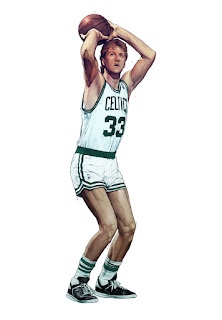 On February 4,1993, the Boston Celtics retired Larry Bird's number 33 before a sold out crowd at the Boston Garden. It was a well deserved honor, Bird spent his entire 13 year career in Boston and was one of the best forwards in the game.

After the Celtics selected him with the sixth overall pick in the 1978 draft, Bird decided to play his senior year at Indiana State. The Celtics retained the rights to him and after his senior year they were able to ink him to a 5 year deal worth $3.25 million. It was the most money a rookie had ever seen. He would prove that he was worth every penny. Before he arrived the Celtics had suffered through a 28-54 regular season, in his first season with the team they posted a 61-21 record, which led the entire NBA. Bird took home rookie of the year honors following that first season as he averaged 21.3 points per game. Despite being knocked out in the Eastern Conference Finals that season, what he did in his rookie year was a sign of things to come. In his second year in the league the Celtics traded for Robert Parrish and drafted Kevin McHale, together they forged one of the best trios in NBA history. With the trio formed they would put together a season that would be capped off with an NBA Title, the first of three in Bird's career. 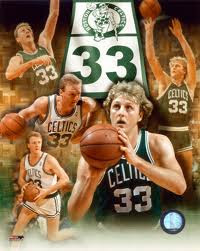 The same year Bird was drafted so was his college rival Magic Johnson. Johnson was drafted by the Lakers and their two teams absolutely dominated the eighties, with one team or the other appearing in every NBA championships in the decade. The rivalry between the two players grew and they met each other in the 1984 NBA Finals with Bird and the Celtics winning the title in 7 games. Bird would win one more ring in 1986 as the Celtics toppled the Houston Rockets in The Finals.

The last few seasons of his career he posted solid numbers but was hampered by a chronic back injury. He joined the USA Olympic Basketball "Dream Team" in 1992 and helped bring home a gold medal for the United States. Following his Olympic appearance Bird announced that he would be retiring from the NBA, his playing days were over but his legacy would be forever ingrained into the history of Boston sports. In his 13 seasons as a member of the Celtics the team only missed the playoffs one time. He scored 21,791 points, was selected to 12 All Star Games and boasted the three NBA titles, as well as the gold medal before he retired. He was one of the most dominant men of his time and 20 years ago today his number was raised to the rafters.
Posted by Wade Forrester at 5:11 AM