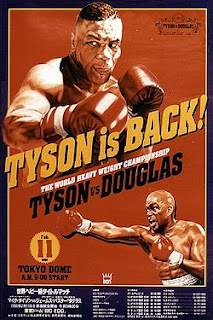 On February 11, 1990, in Tokyo, Japan, Buster Douglas stunned the world by knocking out the undisputed Heavyweight Champion Mike Tyson. Douglas walked into the fight as a 42-1 underdog and no one thought he would be able to take on "Iron Mike". Douglas had lost his mother just 23 days before the fight, it was a motivating factor for Douglas, he would have made her proud as he had trained hard, and came in prepared to fight the champ.

From the moment the bell rang Douglas was looking confident. The early rounds had a lot of back and forth action, Douglas held his own as he knocked Tyson back with thunderous shots. Douglas not only surprised the world by hanging in there I'm sure Tyson was surprised by the dominance he was displaying in the ring. By the fifth round Tyson was clearly being dominated, everyone watching was just waiting for that moment when he landed a blow that turned the momentum back his way. That moment came in the eighth, Tyson landed a crushing right uppercut that sent Douglas crashing to the floor. Douglas pounded the canvas with his glove in disgust before rising to his feet, more determined than ever to win this fight. In the ninth round  Tyson looked like a man on a mission, his only problem was Douglas had a mission of his own. Midway through the round Douglas unleashed a combination of punches that sent Tyson crashing into the ropes, the only thing that saved Tyson was the bell. Tyson wouldn't be so lucky in the tenth, Douglas landed a huge uppercut  before a rapid combination that sent Tyson to the floor. It was the first time he had ever been knocked down, he tried desperately to put his mouthpiece back in his mouth and get back to his feet, but couldn't beat the count. Buster was the new Heavyweight Champion of the World. 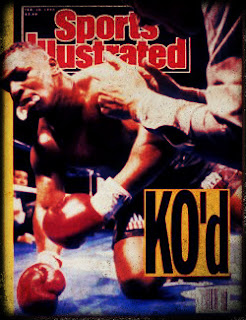 Tyson was so dominant in his early years that I would have thought that there wasn't a boxer on the planet that could beat him. He might have been overlooking the fight with Douglas knowing that Evander Holyfield would be his next opponent. It almost seems that he didn't take the matchup with Douglas seriously which cost him his title. Tyson tried to get a rematch with Douglas only to be turned down. Douglas decided to defend his title against Evader Holyfield, the fight against Holyfield was unsuccessful as Evander took the title from him in October of 1990. Buster Douglas might not have held the title long, but he will forever have his name cemented in sports history as an underdog who defied the odds by beating Iron Mike Tyson.
Posted by Wade Forrester at 5:17 AM