On February 10,1999, Russ Courtnall of the Los Angeles Kings joined his brother Geoff in the 1,000 game club. It was the first time in NHL history brothers had played in 1,000 games apiece. Geoff appeared in 1,048 games over 17 seasons with the Boston Bruins, Edmonton Oilers, Washington Capitals, St. Louis Blues, and Vancouver Canucks. Russ played for 16 seasons, got his start with the Toronto Maple Leafs, he then spent time with the Montreal Canadiens, Minnesota North Stars, Dallas Stars, Vancouver Canucks, New York Rangers, and finally the L.A. Kings. They were teammates only once in their careers during the '94-'95 season in Vancouver . 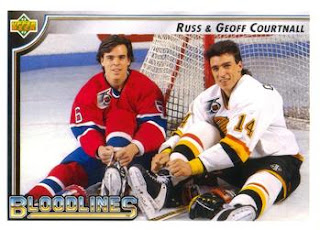 Throughout their careers the brothers put up solid numbers,  Geoff scored more the 20 goals in 11 different seasons while Russ accomplished it 10 times. As far as scoring 30 or more goals in a season Geoff did it 7 times while his brother only achieved it once. They were both speedy players who could setup a goal and score one as well. Their career numbers are very close. Russ scored 297 goals and had 447 career assists under his belt bringing his point total to 744. His brother Geoff scored 367 goals along with 432 assists for a total of 799 points. Russ came very close to being a Stanley Cup Champion in 1989 with the Montreal Canadiens, the team lost 4 games to 2 in the Finals to the Calgary Flames. Geoff  won it the year before after he was traded to the Edmonton Oilers late in the '88-'89 season. Geoff only played in 31 games between the regular season and playoffs for the Oilers but he helped the team win the holy grail of hockey in those 31 games. His time in Edmonton might have been short but it was the only time either brother would hoist The Cup.

There are 282 players in the 1,000 game club, there are only four sets of brothers. Kevin and Derian Hatcher, Brent and Ron Sutter, and Scott and Rob Niedermayer have since accomplished the feat. Just playing in a 1,000 games puts a player in a pretty elite club, if you even try to think of how many men have played in the history of the NHL then realize only 279 men are in that club it makes it truly a remarkable milestone in any players career. To have a player accomplish the milestone along with his brother makes it even more remarkable, more brothers will achieve their dreams of playing in the NHL and chances are that another set will hit that milestone, Goff and Russ Courtnall will always be the first.
Posted by Wade Forrester at 4:23 AM