On February 3, 1977, a 19 year old Bernie Ferderko of the St. Louis Blues scored the first goal of his NHL career in a 5-4 loss to the Bruins in Boston. Ferderko had recorded an assist earlier in the contest giving him two points in the game. It was the beginning of a career that would lead to a Hall of Fame induction ceremony. 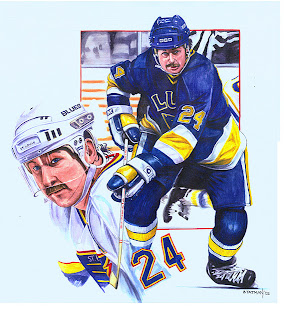 A native of Foam Lake, Saskatchewan, Canada he had great success in his youth, winning scoring titles in the lower leagues before moving onto the WHL, where he played for the Saskatoon Blades. While a member of the Blades he set an assist record that still stands today. In the '75-'76 season Federko broke the WHL record for points with 187 on the season which brought the young player plenty of attention from NHL scouts. The Blues took Federko with the 7th overall pick of the 1976 amateur draft and he proved that they made a great selection as he thrived with their minor league affiliate out of Kansas City. After scoring 42 points in 69 games with the Baby Blues he was called up to the NHL club along with teammate Bruce Sutter. After scoring in his first game as a member of the Blues he would continually impress the coaches and fans alike. In 31 games with the club, he lit the lamp 23 times, recording 3 hat tricks as he helped the Blues win the top spot in the Smythe Division. In his first full season in the NHL Federko became a star recording 85 points in the '78-'79 campaign. He would have continued success in his 13 seasons with the Blues. The first player to record 50+ assists in ten consecutive seasons, led the team in scoring nine times, scored 20 goals or more in 11 seasons and had four seasons where he surpassed a 100 points. He was a very unselfish player who would set up a play, just as quick as he would finish one. In the summer of 1989 the Blues traded Federko to the Detroit Red Wings, he played one last season there recording 57 points before hanging up the skates. 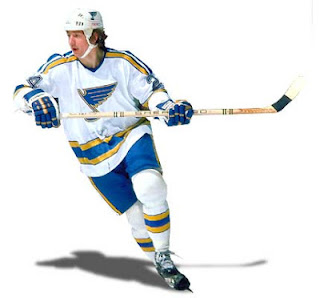 Federko was one of the most underrated players of his time, despite his accomplishments he would only be selected to the All Star Game twice. Despite that fact his career would not be forgotten especially in St. Louis. In March of 1991 Federko's #24 was retired by the Blues and a statue of him stands outside of the Scottrade Center in St. Louis. In 2002 he received well deserved recognition as he was inducted into the Hockey Hall of Fame. He played in exactly 1,000 games in the NHL, in those games he scored a grand total of 369 goals along with 761 assists bringing his point total to 1,130. Federko is still a part of St. Louis today, he does color commentating for the team and is a big part of the community, involving himself in local charities, always willing to lend himself to anything that he can help with. There are great athletes and great people Bernie Federko is both of those. As a St. Louisan I am proud to say that he not only played in this city, he become part of this city.
Posted by Wade Forrester at 4:14 AM